THE ARRIVAL OF CRICKET IN MADRID

The Arrival of Cricket in Madrid

Spain, when thought about on sporting terms, casts your mind directly to football, basketball, tennis and motorsports, and maybe a handful of other sports like golf. But cricket? Not really! Well, on a global level, not at all! In a country that didn’t even recognise cricket as a sport less than a decade ago, it is easy to imagine the difficulties that Cricket España and the clubs in Spain have had just to play a match. So how did cricket arrive in Madrid and how is it evolving in Spain’s illustrious capital? I interviewed Colin Oliver-Redgate to get an idea of how it all started.

How did you end up in Madrid?

When the Bank Of London & South America (BOLSA), sent me from London to work in Spain at the age of 21, my first post was to Seville in June 1962, in the middle of the cricket season in the UK. My posting to Seville was followed by a move to their Madrid branch in September 1963, and by mid-1964 I had missed the best part of three seasons of cricket, a game in which I had excelled as a youngster; playing for Hampstead CC; Club Cricket Conference; the Sussex Martlets; and Littlehampton CC.

It was over a casual game of snooker in the Spring of 1964 at the British-American Club, next to BOLSA in Calle José Antonio, that I heard someone mention that they were going to play cricket with some friends that weekend. My initial excitement was tempered when I heard that it was just a casual softball game between half a dozen friends, on a flat piece of ground in the countryside to the north of Madrid, where they sometimes enjoyed a picnic with the snow-topped mountains of Navacerrada as a background; – undisturbed by the Guardia Civil who might have mistaken the muffled sound of bat against ball as some subversive activity against the regime of Generalissimo Franco!Nevertheless, the seed had been sown!

How did you go about playing cricket in a country that had no idea what the sport was?

There were some cricketers in Madrid!  What could I do about forming a team? – and then where to play? – against what opposition?

My thoughts turned to the British Embassy, a focal point for business and pleasure for ‘ex-pats’. I knew Peter Samuel, the son of Ian Samuel, the Chancellor (No.2) at the Embassy, who suggested I make enquiries there, to see if anyone knew of past activity concerned with playing cricket in Spain. Someone thought there might even be some cricket kit in the building, and a few days later I received a phone-call to say that a cricket bag had been found in the basement, with all the gear, plus a roll of perfectly preserved coconut matting, and would I like to come and see it; adding that the kit was in a very poor state of repair and probably hadn’t been used since before the Civil War, and that I could even take it away if I could find a use for it.

I gladly accepted their invitation, and loaded the dusty cricket gear plus the large, heavy roll of coconut-matting into a Seat taxi, returning to my apartment in Calle Fundadores, near the Plaza de Toros, where the balcony was useful for extra storage. My flatmates, Peter Tyler who worked with Dorland Advertising; Jaime Carriòn, who worked in marketing; and Alan who designed currency notes with De La Rue; were all excited at the possibility of a global sport being introduced to the Spanish scene. The two bats had succumbed to woodworm; and the gloves and pads offered scant protection in their dilapidated state. However I set about trying to spruce up the kit, and contacted some friends to see if there was sufficient enthusiasm to take things forward to a knockabout one weekend; the venue to be decided, but probably on the Madrid University Campus.

First of all, the kit needed updating! So I arranged for a ‘Charity Sketch’ during a social evening at the British American Club to raise funds for some new kit. Our sketch was based on the UK programme “That Was The Week That Was”! Ingrid Stafford-Allen, who worked for Roche, brilliantly emulated Millicent Martin, and general amusement was coupled with enough generosity by members to send off a bankers draft to Gray-Nicholls for bats, gloves, pads, and balls, to be sent by return to me c/o the bank in Madrid.

Where did you play?

My social contact with Jaime Royo-Villanona, the son of the Rector of Madrid University, paid off; and he helped me to arrange the use of the rugby ground adjacent to Colegio Mayor Xisneros Campos. About eight cricket enthusiasts made their way there; among them were English students, an Australian, and a Dutchman. We laid out the coconut matting on some uneven grass in the middle of the rugby ground; pitched one set of stumps, and with an old cricket ball we enjoyed a couple of hours in the sunshine, while some curious students were seen leaning out of their study windows wondering what they were missing, or even if they would be safe if they ventured closer, with cries of “Howzatt”, even the occasional “Olé!” ringing around the campus.

This was followed by a couple more sessions during the ensuing weeks, after which I arranged a more appropriate change of venue to the Real Madrid Sports Club situated to the north of the city, north of the Bernabeu Stadium; where we met with a certain degree of scepticism from the Club, but enjoyed the added facility of a couple of beers after practice.

Who did you play against?

Our little squad of cricketers was by then increasing in numbers, enough to think about arranging a fixture. So I wrote to the Royal British Club (www.royalbritishclub.pt) in Carcavelos, near Cascais/Estoril, Lisbon, where they had played cricket regularly for many years in the grounds of St. Julian’s School, entertaining touring sides from the UK. A weekend in early October 1964 became the focal point for the first game of cricket to acclaim the rebirth of Madrid Cricket Club!

News travelled fast, and there were many takers for the weekend visit to Lisbon, including a former student at Madrid University, Jeremy Paulson-Ellis, who has subsequently settled into a job in the City with Vickers Da Costa stockbrokers, and who was keen enough to take the time off to drive to Madrid in his Mini, and then to drive another 500 Kms down to Lisbon in convoy with five other cars. The excitement was intense!

We had booked rooms in an hotel in Lisbon, and arrived there late on the Friday afternoon, with enough daylight time to drive out along the coast to Cascais for a breather on the beach, and take a brief look at the facilities at the nearby Royal British Club in Carcavelos. We were not disappointed, and our hosts made us feel most welcome.

We decided on a practice game on the Saturday to give everyone a bat and a bowl, to make the whole proceedings as inclusive as possible; then engaged in a full game of cricket on the Sunday, with an 11:00 start, and lunch at 1pm.

Precise details of the games have been lost, but they were briefly recorded in the ex-pats Guidepost Magazine (www.guidepost.es) in their November 1964 issue, courtesy their correspondent Sonia Copeland (with whom I had coincidentally played tennis on the courts at Ham Manor Golf Club, Angmering, in the 1950’s). The home side won both encounters, with some 500 runs scored in the two games between the two sides. However, the ‘piece de resistance’ was the splendid lunch our hosts provided between the innings on the Sunday, lasting some 1.1/2 hrs, (!), with several speeches, and many decanters of the local vintage Port consumed; after which the standard of cricket in the afternoon suffered from a mixture of hangovers and induced siestas on the boundary! However, with the usual ‘competition’ subdued, the friendly atmosphere both on and off the field left everyone well satisfied with the historic event of a resumption of cricket between clubs from two major cities in the Iberian Peninsular.

You mentioned the “rebirth” of Madrid Cricket Club! So Madrid CC had existed even before you started playing in the capital?

Well, the equipment we were given in Madrid might have been used when the Embassy staff might have arranged a long weekend away, to play the Navy, and/or the police in Gibraltar.

Judging from the state of the equipment that was given to me, we could be estimating the 1920’s or earlier. They might have also played v. The British Embassy in Lisbon.

However, the concept of Madrid Cricket Club surfaced in London in the late ’60’s when I persuaded a group of cricketing friends from London and Cheshire to play some annual games, late July ’66-69, against Farley Hill CC, in the heart of the Berkshire countryside; also arranging a game, courtesy Club Cricket Conference, against Orpington CC in Kent in which county player, John Dye (the current ECCL Chairman), opened the bowling for the home side! Notably, the Madrid CC opening batsmen were Stewart Newton, who at the time worked as an investment analyst with stockbrokers Greenwell & Co (later to form Newton Fund Management), and ex-Madrid student Peter Benson, subsequently with global accountants Cooper Bros; a formidable partnership both on and off the field! – and closely followed at No.3 by Simon Cussons, (also working  at Cooper Bros, before returning to his family’s ‘Imperial Leather’ soap-business in Cheshire). In all, “Cricket’ was the overall winner, bringing together like-minded people, defying logistics and rising to the challenge of pursuing this endearing sport.

So, you eventually returned to England?

Yes. All good things come to an end, and it was just a month after the trip to Lisbon, in November, that the bank recalled me to their London office, and with the kit duly returned to the British Embassy for safe keeping, all contact was lost, and the fate of future cricket in Madrid was left in the hands of locals. It is disappointing how quickly people can, sadly, lose touch without making a conscious effort to maintain contact as we move on to fresh pastures in our lives.

However, several months of renewed cricket in Madrid in 1964, maybe the first time in 20-odd years, laid the foundation for the vibrant and continuing enjoyment of the game in current times, in spite of the challenges of the coronavirus pandemic, thanks to the continued enthusiasm and support of the new Madrid CC.

I would like to wish everyone involved in Cricket in Madrid, and Spain, all the best for a “corona-free” 2021 season!

Madrid CC officially became a club in 1975, thanks to a group of immigrants, including Phil Smith, who eventually moved on to Barcelona and founded the second official cricket club in Spain there. The two clubs eventually met on the field of play in 1982, during the Football World Cup. From there cricket started growing, but Madrid CC disappeared from the capital for nearly a decade until it was resurrected in 2001 by Thomas Fryer, Alex King and Jonathan Woodward…… but that is another story! 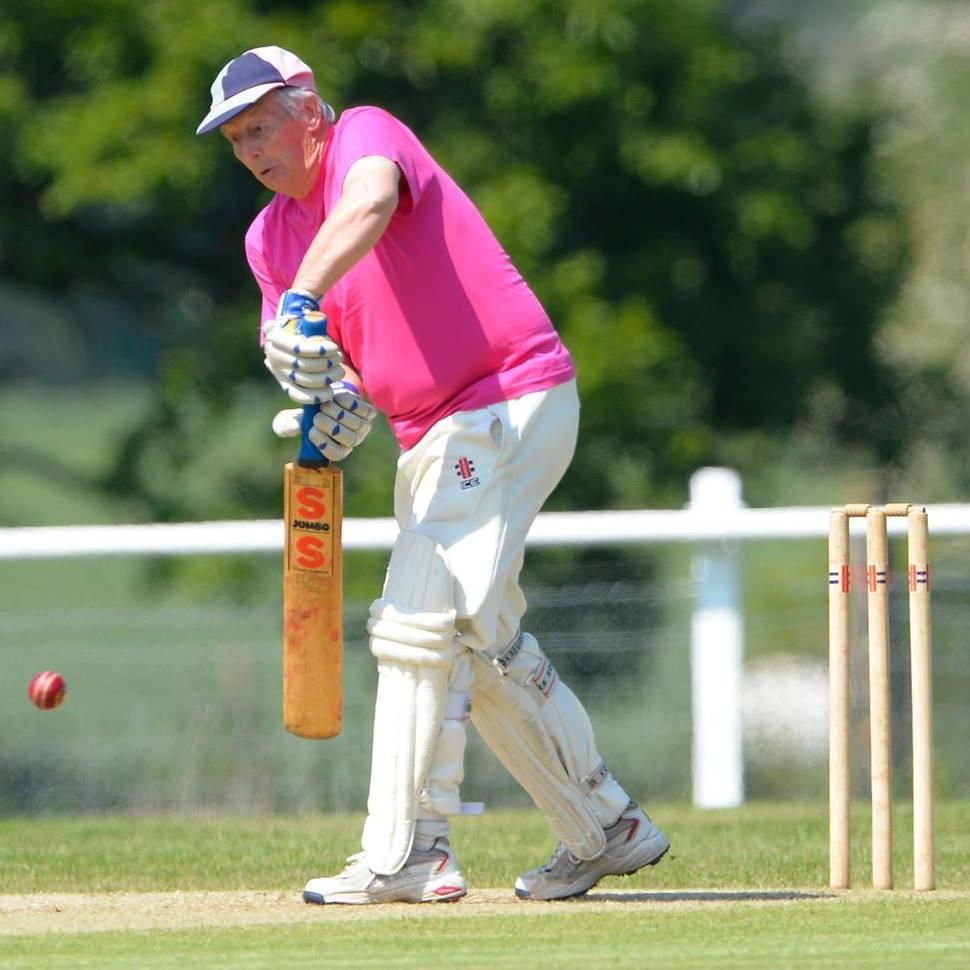