Howzat! Willow on Leather And Cricket On A Tenerife Afternoon by Colin Kirby

Closing my eyes I could have been at Lords, the gentle chime of a church bell, good natured clapping, and the whack of bat on ball. But with eyes wide open it was a very different scene, a small football ground with artificial turf high up in Fañabe village with hazy clouds pressing down on the cracked and rugged volcanic mountains. There was no mistaking the enthusiasm for the game though, Tenerife Cricket Club were starting pre season trials and a Twenty20 game was in full swing. 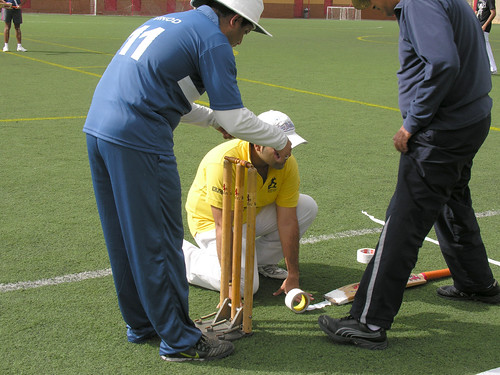 This short sharp version of the sport has become massively popular in barely 10 years and the Indian community of Tenerife has embraced it as well suited to weekly Sunday afternoon gatherings. Cricket has much longer and all reaching roots in the Canary Islands as club president Suresh explained. “We used to play at Las Teresitas near Santa Cruz in the 1970’s but the current club was formed 5 years ago down south and we have used football grounds in Adeje, Armeñime and Fañabe. We play regular games with Las Palmas from Gran Canaria and Lanzarote, their club in Arrecife has 7 teams of different nationalities.” 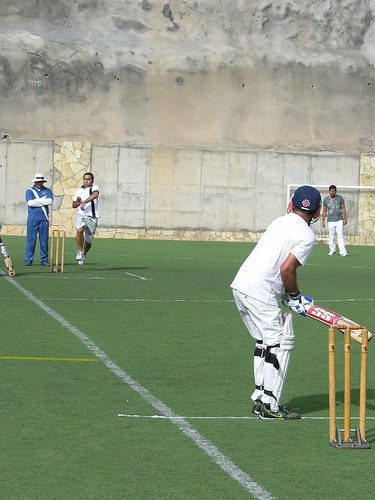 In past seasons the Tenerife club has run a mini league with teams sporting names typical of the new PR savvy form of the sport. Scorpio Warriors and Pagoda Kings are names that would fit well in the upbeat glossy Indian Premier League that mixes show business with big money star players. It’s not quite that glamorous here in Tenerife, racing pigeons nestled in coops on village roofs as we waited for a key holder to let us into the football ground. Players warmed up with bat and ball in the car park, a stray shot trickled away down the hill road prompting a quick recovery dash.
Once the wickets were set up, the artificial grass is perfect for marking creases with tape, the players loosened up and formed 2 teams. The bowlers were charging in at full pelt but the batsmen were picking off some decent lusty strokes to keep the scores ticking over. It’s not so easy in these crunch times for players to get away from their work and business’s but their love of the sport was clear and despite the unforgiving nature of the plastic grass diving stops kept a lid on the batsmen trying to break away. 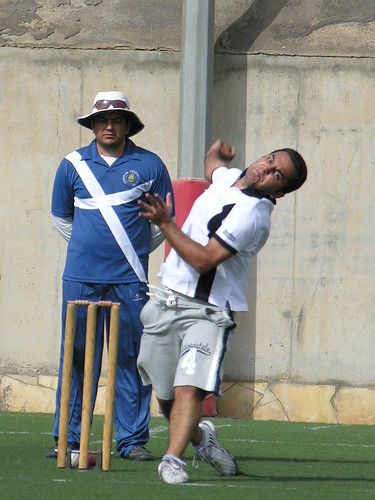 The club are always looking for extra players and keen to get over 15 sessions going on Sunday mornings. Suresh also wants to extend the playing time “Twenty20 is good but longer matches along test lines would give players more experience of fielding and bowling.” For now though the humid sun burning through the sporadic cloud adds an extra edge to the action and the sound of Ave Maria blaring out from the post fiesta plaza adds a surreal feel to proceedings.
All players are welcome to turn their arm or play a few strokes, contact Manga on 667899045 and dig out that bat from your sports bag.