Raval Sporting had to wait for their league debut as they were the fourth of the five teams in this year´s Cataluyna Junior League to step on the field of play, but it proved to be a worthwhile wait, as they started off in winning fashion with a victory over Barna Royals.

Batting first Raval posted a par total on the Montjuic pitch of 124 all out, but made the cardinal sin of not batting out all their overs, finishing their innings with 11 balls remaining. Opener Lovepreet Singh top scored with 57, but what would be of concern to Sporting would be the fact that they lost their last five wickets for just 22 runs. On the flip side, Royals can be pleased that five of their six bowlers had at least one wicket to their name.

Barna´s batting proved to be their achilles heel, as they were bowled out for just 94. Syed Hashim scored 33 and Anas Muhammad added 12 but all the other batsmen failed to get into double figures.  For Raval, Faisan Ahmed had a good day with the ball, taking four wickets for just six runs. 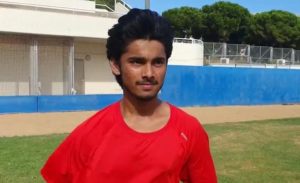