MINHAJ OF BARCELONA TO REPRESENT SPAIN AT THE ECL

Minhaj of Barcelona outgunned Levante of Valencia in the National T10 Finals series at the Woodbridge Oval last weekend to confirm their place as the Spanish representatives in next years European Cricket League.

The team from Cataluyna were put into bat in the first game after Levante won the toss and scored 123 for four from their ten over allocation. M Riaz with 59 not out was top scorer for Barcelona, and along with A. Hussain they put on 69 for the third wicket in just five overs.

In reply, Levante were always behind the required rate after getting off to a slow start and losing several key wickets.  At the half way stage of their innings they were 32 for 4, and consequently, never really posed a serious threat to chasing down the Minhaj total. Their innings finally finished on 65 for 6 with only Azhar Abbas (37) and Dave Tivey (12) reaching double figures for the Lightening.

Riaz capped off a fine all round performance for Minhaj by bagging three wickets for just 12 runs and he was well supported by Khalid who took two wickets in the only over that he bowled. The 58 run victory for Minhaj gave first blood in the three match series to the Catalans.

Levante again won the toss in game two, but this time elected to bat first. They proved much more competitive this time around scoring 108 for four in their ten overs. Azhar Abbas was once again the top scorer for Levante, making 34, whilst opener Shakeel Khan added 20, and a late cameo by Furqhan (22) edged the Levante total over the three figure mark.

Riaz once again proved a thorn in Levante´s side, as he brought his team home to victory with an unbeaten 47. His 84 run partnership with A. Hussain surpassed their efforts in the first game and brought their side close to victory before the latter was caught off the bowling of Ibtisam with eight runs required. Minhaj finally secured an unassailable lead in the series by overcoming the Levante total with five balls to spare.

With the third game being a dead rubber both sides agreed to not play the game. Minhaj will now represent Spain in the club championship of Europe that will be played in May/June at La Manga next year. They will compete alongside inaugural winners V.O.C. of Rotterdam as well as teams from the likes of Denmark, France, Italy, Belgium and Finland. For further information on the ECL visit their website at https://ecn.cricket/ 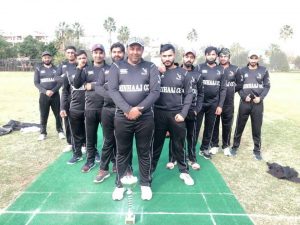