MEMBERS OF MADRID CRICKET CLUB APPEAR IN THE ENGLISH

The BBC and Amazon Prime come to Madrid

It’s not often that you find cricket in a TV series filmed outside of the Commonwealth, let alone on Netflix, Amazon Prime or HBO. So, you could imagine my surprise when I was contacted by a casting agency over a year ago asking for help in filming a cricket scene here in Madrid. “The English” is a new miniseries produced by the BBC and Amazon Prime. Set in the late 19th century in the Wild West, it tells a story of woman’s journey into the new colonies of the USA where the English, among others, had settled. 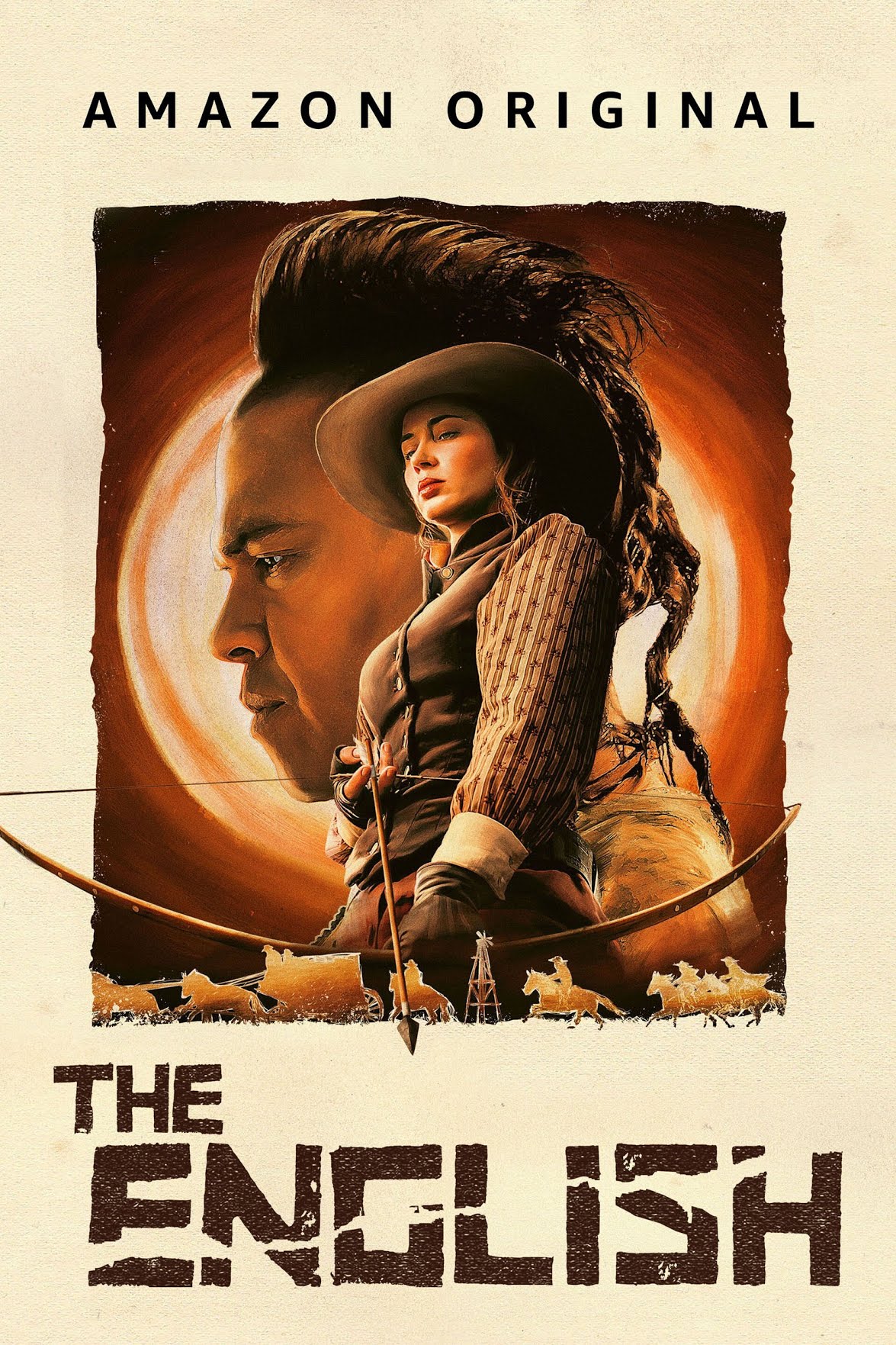 After various delays, due to the COVID pandemic, filming was set for late July 2021 and I was finally able to meet the production team. I was asked to collaborate with the team and help with the specifics of our sport and with finding other cricketers that would fit with the profile of the characters. It was a great opportunity for the members of Madrid CC to see a scene from a TV Series being made and to be a part of it as extras. The club has been involved in filming before (A TV advert about 6 years ago) but this was quite different.

A few weeks before filming was due to start, the 6 Madrid CC extras were asked not to shave or cut our hair until after our cricket scene. I don’t think I’ve ever had a beard longer than a cm before I got fed up with it and shaved it off, so this was more of an effort for me than I had imagined. Others, however, fared much better, with Dan and David producing WG Grace worthy beards.

Our first step came with the wardrobe fitting. I was first up for the experience. The wardrobe team were fantastic. They were very friendly and had already done some investigating on what would have been worn in the late 19th Century cricket games. I had a look and helped with a few adjustments. Being in the Wild West, they would have had to adapt the clothing a little but keep up with traditional dress, and the wardrobe department did a great job with this. The other Madrid CC extras went the following day and we were able to see the preview photos just a day later. ….. we had a few laughs!

The props department also had some work to do. I gave them some old stumps and bails that they used for measurements, and they made a full set of new ones with designs I found from museum pieces online. The finished pieces were very good.

Two weeks later, and yet another PCR test done, we were ready to go.

The day finally arrived, I picked up the budding actors in the van and we drove out to the countryside between Madrid and Segovia. As we arrived and saw the scenery, it was very obvious to why the production team had chosen this location for filming. Hilly, dry, fairly treeless, with dried out weeds and plants as far as the eye could see….. you could already imagine this being the wild west.

We drove up to the entrance of the road that led through to the basecamp of production and were greeted by a single guy manning the gate. With a big smile on his face, he waved us through, pointing in the direction of the car park. The gravel and dirt road was narrow and bumpy and even had a few tumble weeds resting on the verge. I imagine it was easy for the actors to forget they were actually in Spain and get into character.

We parked the van and walked across the carpark to the large marquees and tents that had been erected in what can only be described as “the middle of nowhere”. We were greeted by some very friendly staff that pointed us over to a cafeteria with plenty of seats and tables and were offered some breakfast. “Best have something to eat and drink now before make-up” came the suggestion by one of the ladies who then gave us another big smile and disappeared into the large marquee. Make-up…… damn…. At no point had I imagined needing make-up as an extra in a wild west tv series… hadn’t even crossed my mind! I suddenly felt very “green” and lost!

As we approached the empty cafeteria, we saw a small tent sent up to give COVID tests to the crew as they arrived for work. The thought of having yet another person probe my nostrils with an oversized cotton bud until they hit brain was enough to feel instant regret for signing up, so it was such a relief when we realised that we didn’t need another COVID test and were able to simply go through to get breakfast. 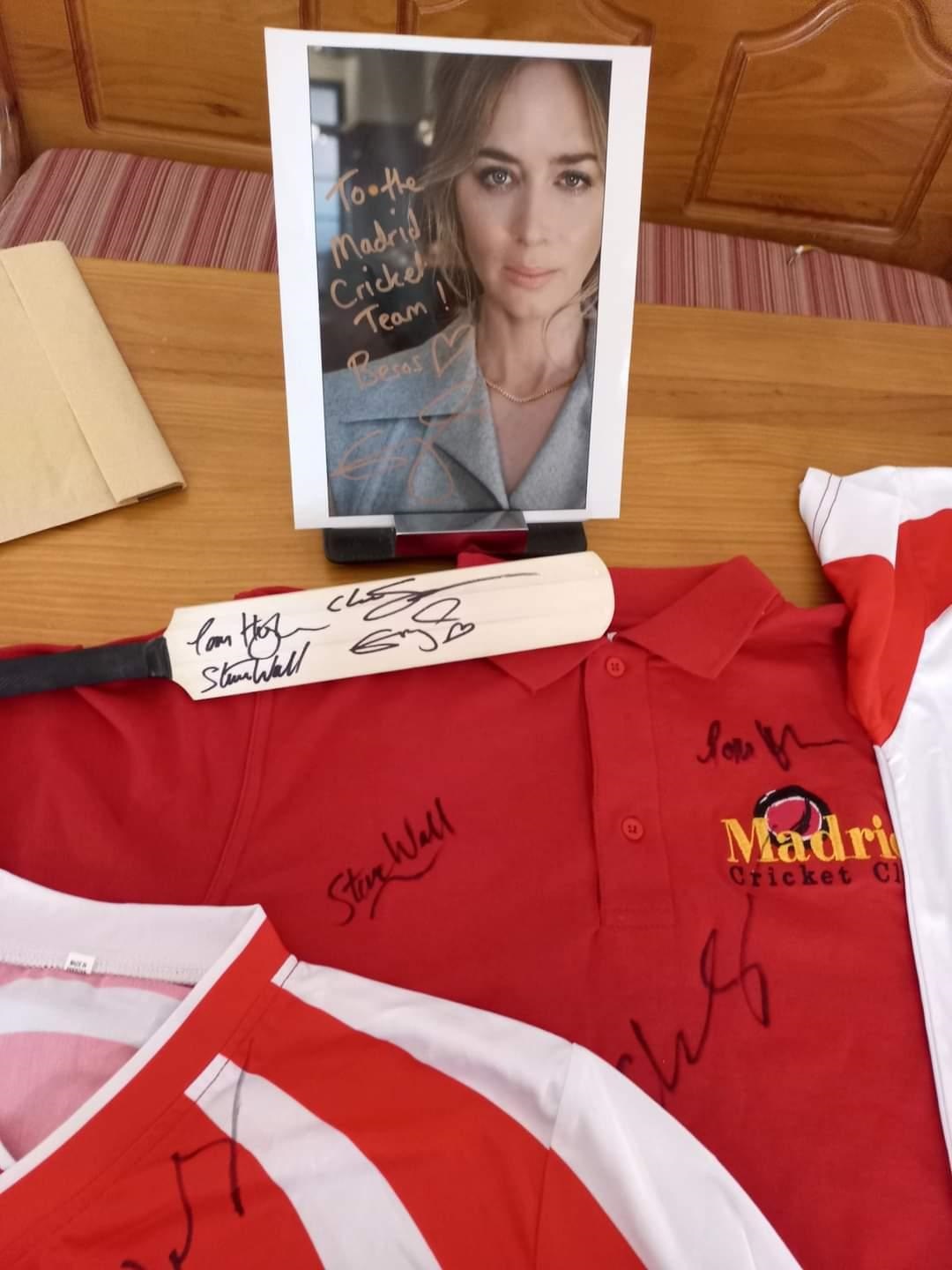 We sat in the cafeteria for a time and met a number of people from the crew, including some more extras that had been drafted in as cricketers. They would be standing in the field to make up numbers. Everyone was very friendly, and they seemed genuinely appreciative of the help we had given them in preparing for this scene. A few even asked for a bit of information on how to play and on the “rules” of the game. It was a good distraction and settled some nerves.

Soon we were met by the crew from Make-up and wardrobe. I am terrible with names, but if I remember correctly, it was Phoebe from wardrobe and Charlotte from make-up. They were lovely and, again, very friendly. We were ushered into chairs where our 6 week beard growth was examined. At last, my itchy and annoying growth would be of use before I could get home and shave the damn thing off. But hold on…… after a minute or so of contemplation it was decided NO, Jon’s character doesn’t need a beard. Just a moustache! Feeling a little disappointed as the beard got mowed, to the amusement of my fellow cricketers watching on, I thought to myself “well, no matter, at least the tosh got through!” But wait!!! Make-up had second thoughts again….. “I have a great prosthetic moustache that is a perfect match to Jon’s hair colour… shave it all!” You have GOT to be having a laugh, I thought! Which is exactly what Adam and David were doing behind me! So my new fake tosh got glued on and off we went to wardrobe.

Wardrobe was pretty quick. We had already had the meetings with Phoebe in the weeks leading up to the filming, so we all just got dressed and back out to the cafeteria. Everyone really looked the part!

The moment we had been preparing for finally arrived and a large all terrain vehicle with massive wheels arrived to ferry us and the crew off to the set. It was great to see everyone dressed up and ready to go. As we approached the set, we could see dozens of crew scurrying around with cameras, sound equipment, tents and gazebos, and a few horses waiting patiently to one side. The make shift cricket field was a LOT better than I had imagined. The stumps had been made to spec and they even had a scoreboard at the far end of the field.

At this point, we met the producer and director. They told me that they had done a little homework on cricket and Tom Hughes had explained a little to them earlier that week, but they wanted to make sure the extras were in the right positions according to the sport. So basically, I set the field and we discussed a few aspects of the shoot before I walked to the non-strike end. Unbeknown to me, this is where I stayed for the next 5 HOURS!! Adam was at point, David was the umpire, Lewis in covers, Harry behind the sticks and Dan at square leg. The other extras were spread around, with two making their way over to sit next to the scoreboard. We were ready to rumble!

We then met Tom Hughes, one of the stars of the series, as he arrived and was to be the batsman facing the delivery. He was a really nice guy and very enthusiastic. The director discussed the scene with Tom and explained what we all had to do. The scene would be filmed in various shots and angles and the ball and sound effects would be added after filming. We weren’t required to give any lines and were asked not to talk. Despite this, David decided to add his own dialogue to the scene a few times and was kindly asked to zip it twice. Much to the amusement of the rest of us.

It was very interesting to see how the filming was done, with multiple angles and close ups done before the director and producer were happy with the result. Cameras were moved to allow for a close up of Tom as he hit the ball and even to show the movement of his feet. The extent of our involvement though, was reduced to standing in the field “looking pretty” and the odd question from the crew. I think I moved more than anyone else as the non-strike batsman because I spent 5 hours backing up! Haha Definitely the longest I’ve ever been in bat for! And I ended up not out, so a pretty good day in the field for me! The two extras by the scoreboard had the easiest day by far though! They simply sat down under the scoreboard and I believe they even had shade from the scorching July sun!

The most interesting part of the scene was when Tom had played his shot and one of the characters staff rode onto the pitch with an extra horse. Tom was then replaced by a stuntman who jumped on the horse and galloped off into the distance. This part of the scene was shot at least a dozen times until the crew were happy and the scene ended. So 5 hours later we finished our job as extras and made our 20 second contribution to the series. FIVE HOURS to film a scene that lasted 20 seconds. AND you don’t even see our faces, toshes, beards or amazing acting! It certainly made you appreciative of the amount of work and effort (and money!!) that goes into producing a TV series!

The crew were amazing and really looked after us during the day, constantly asking if we needed water and answering any questions that we may have had. As we walked away, Tom came over to speak to us and say thanks for taking part, as did the director and producer. One last thing to do though before we left. I had taken my bat and a new cherry with me, as the sound department needed to add in the sound of the ball hitting the bat for the scene. That was probably my main contribution of the day! Haha

We finally left the set, on the extremely cool crew bus, and headed back to the van. The crew said goodbye to us and took a number of Madrid CC shirts and merchandise for the cast to sign for us. The day was over! The merchandise was returned to us a few weeks later, and included a signed and dedicated photo of Emily Blunt (my future wife – don’t tell John Krasinski!). We used all the signed items in auctions and raffles during our T20 tournaments this year, so thanks to the cast and crew for being so generous!

15 months later and the wait is finally over. You can now watch The English on HBO, Prime and the BBC. We are very grateful to the cast and crew of The English for a great experience! Madrid CC…… introducing cricket to Madrid, Spain and now the wild west! 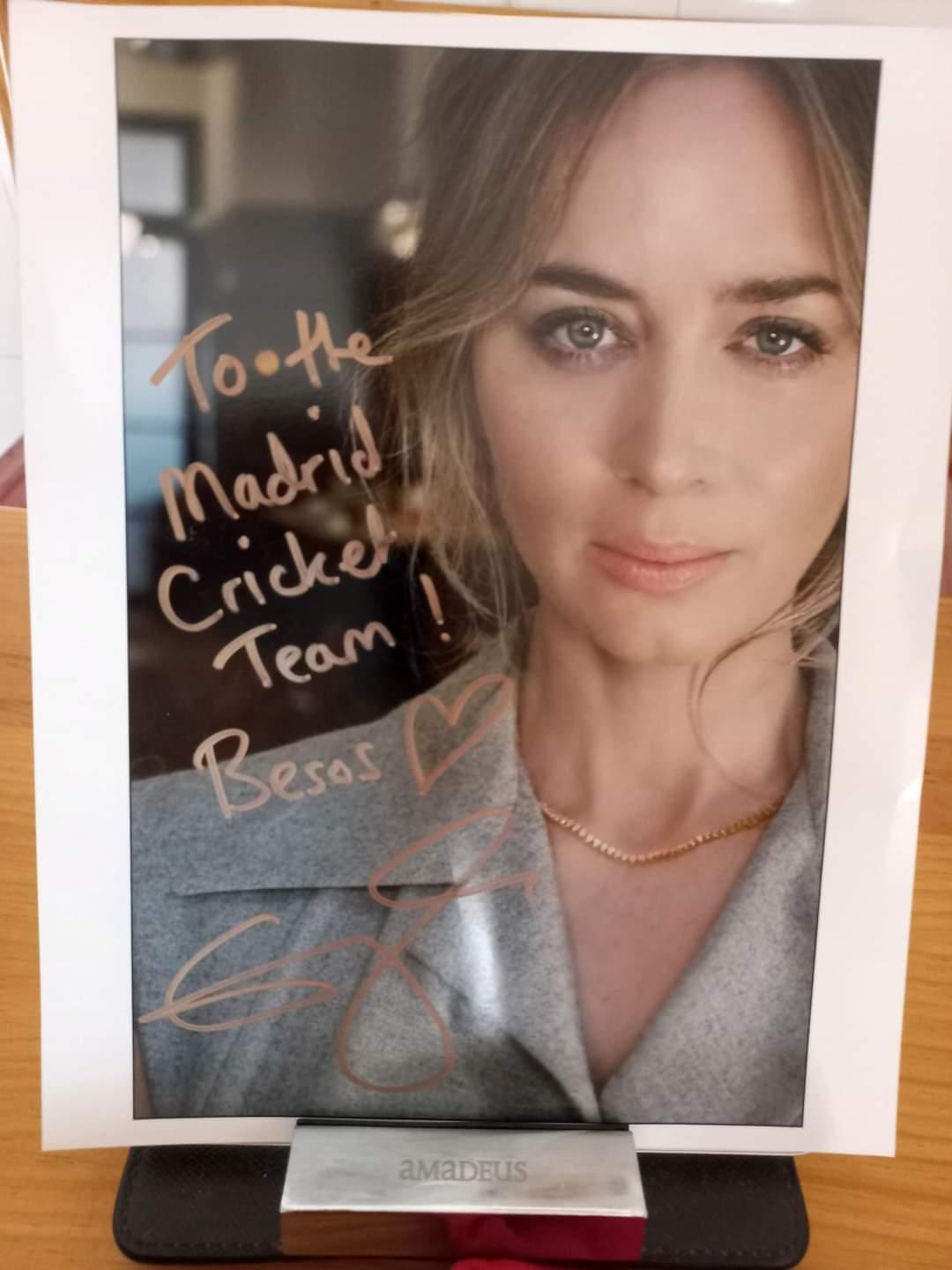