Last weekend Menorca and Mallorca Cricket Club converged on Ibiza to play out the Balearic Cup, an event contested annually between the three islands in May of every year.

First up in this years competition were the hosts Ibiza against Menorca. The visitors batted first and were indebted to Julian Haggar and David Catterall, who scored 88 and 59 not out respectively, to contribute over 3/4 of the runs in their sides total. Menorca finally finished their innings on 195 for nine.

In reply, Ibiza overtook the required total in the 35th over of their innings. A fine 77 by the former Spanish international Antonio Barca put Ibiza into a winning position, and the victory was brought home by Warner Van der Vegt (59 not out) and Rory Thomson (15 not out) in an unbeaten fifth wicket partnership worth 48 runs. 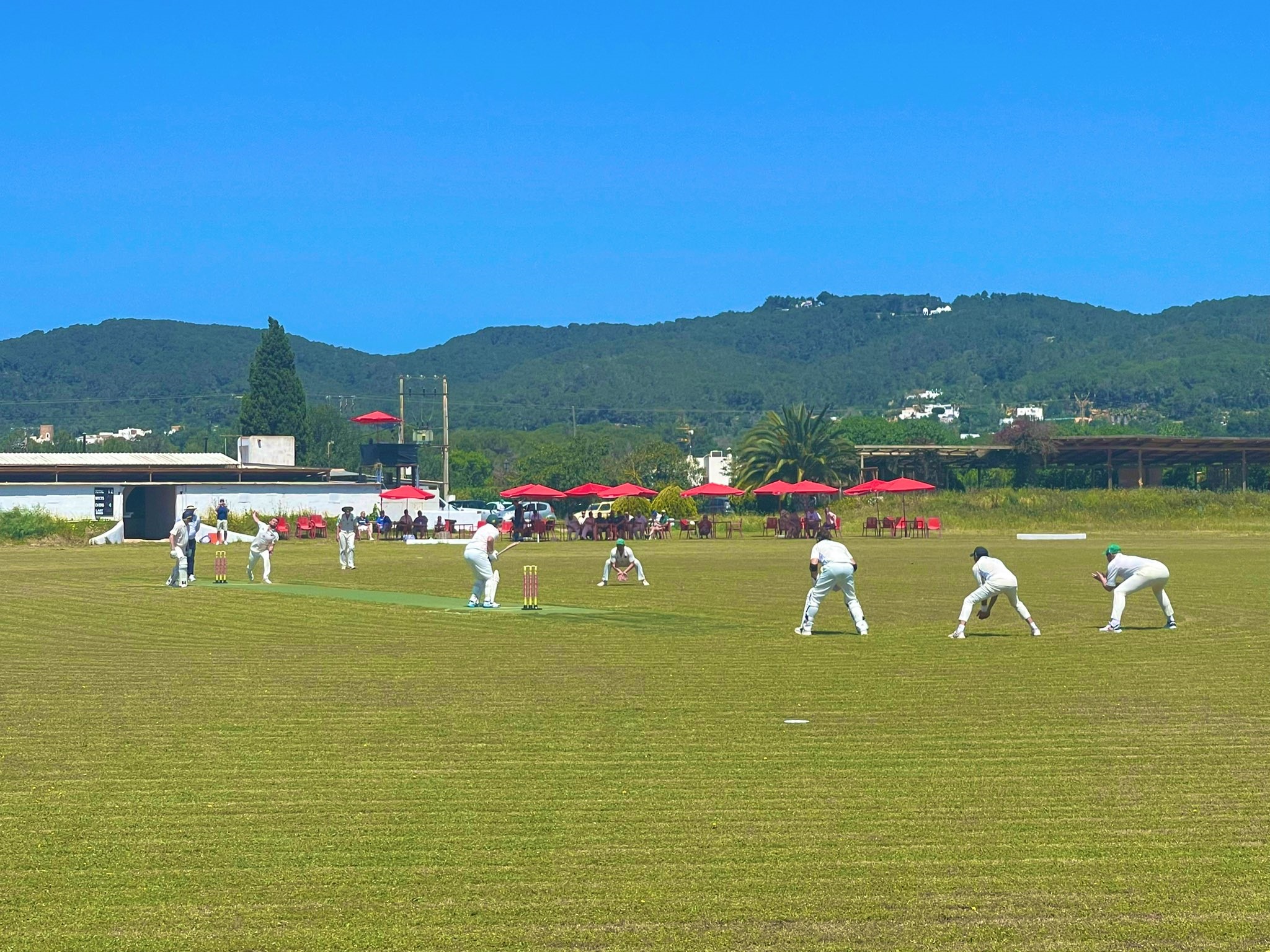 Ibiza then played the second match of this years tournament against Mallorca. Once again it was the visitors who batted first, but Mallorca were soon in trouble as Ibiza had their opponents struggling at 22 for 3 in the eighth over. Mallorca never recovered and were bowled out in the 31st over for 107 with almost ten overs of their innings remaining. Paul Cruttwell and Sam Feasey took three wickets each for Ibiza.

The hosts had little problems in chasing down the sub-par total. Antonio Barca, once again, played a key role in the victory, hitting 49 off 68 balls to put Ibiza in control and they finally won the game for the loss of just four wickets. 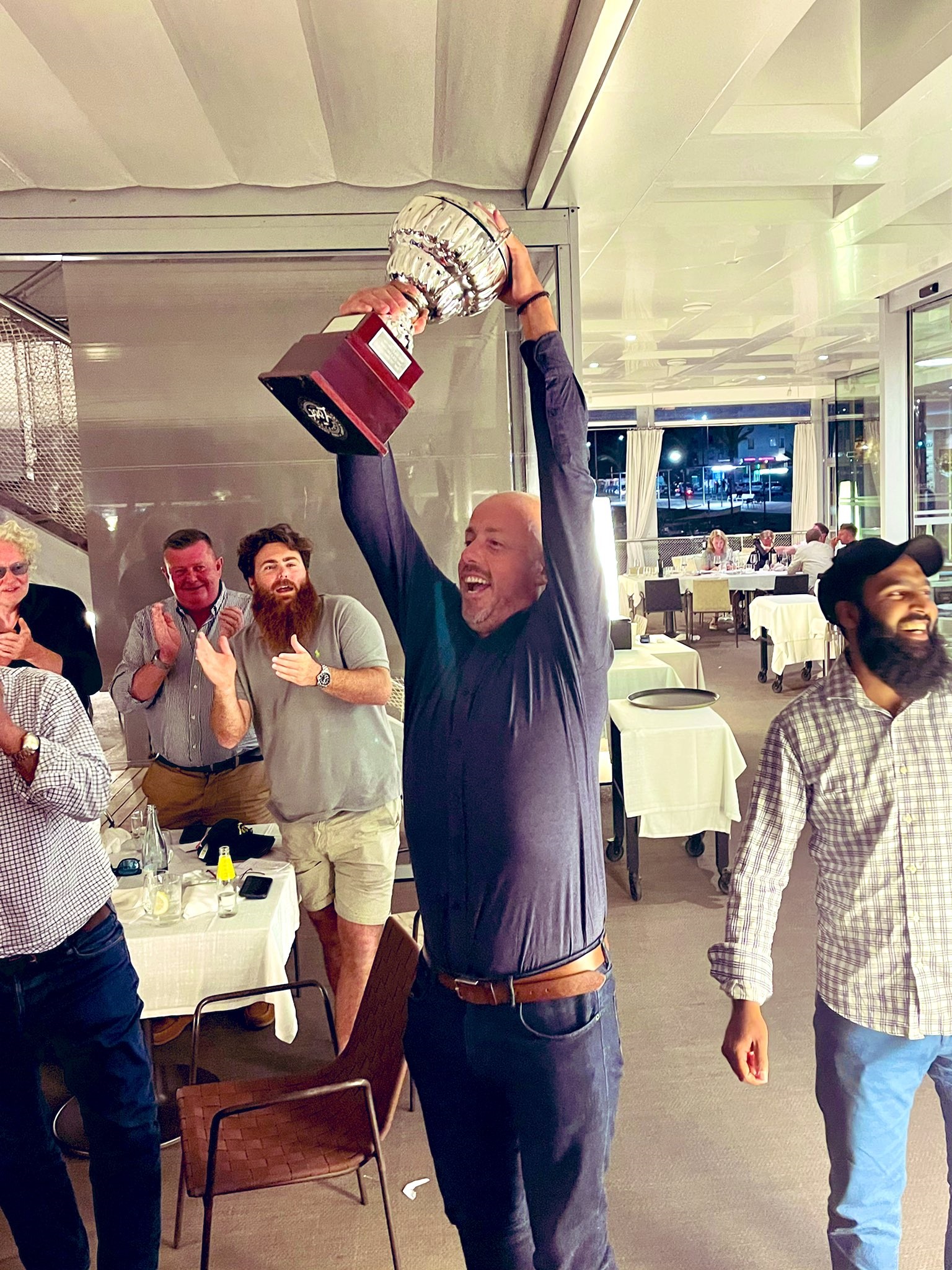 With Ibiza already crowned Champions, the Mallorca v Menorca game was a dead rubber, but it still remained important for bragging rights between the two neighbours. Mallorca batted first and looked an entirely different proposition with the bat than they had looked two days earlier. They took a liking to the Menorca bowling and scored 263 for eight from their 40 overs. Mujahid Ali, batting at four, scored a fantastic 115 not out, and he was ably supported on this occasion by Ben Vickers, who completed a half century for his team. The pair put on 119 for the fifth wicket to leave their team in a comfortable position at the interval.

Menorca respònded pluckily and put in a good effort to score 224 for 8 from their over allocation. Julian Hagger once again was amongst the runs, hitting 66 to complete a good Balearic Cup for him personally. His team fought all the way to the end, but finally lost out by 39 runs. 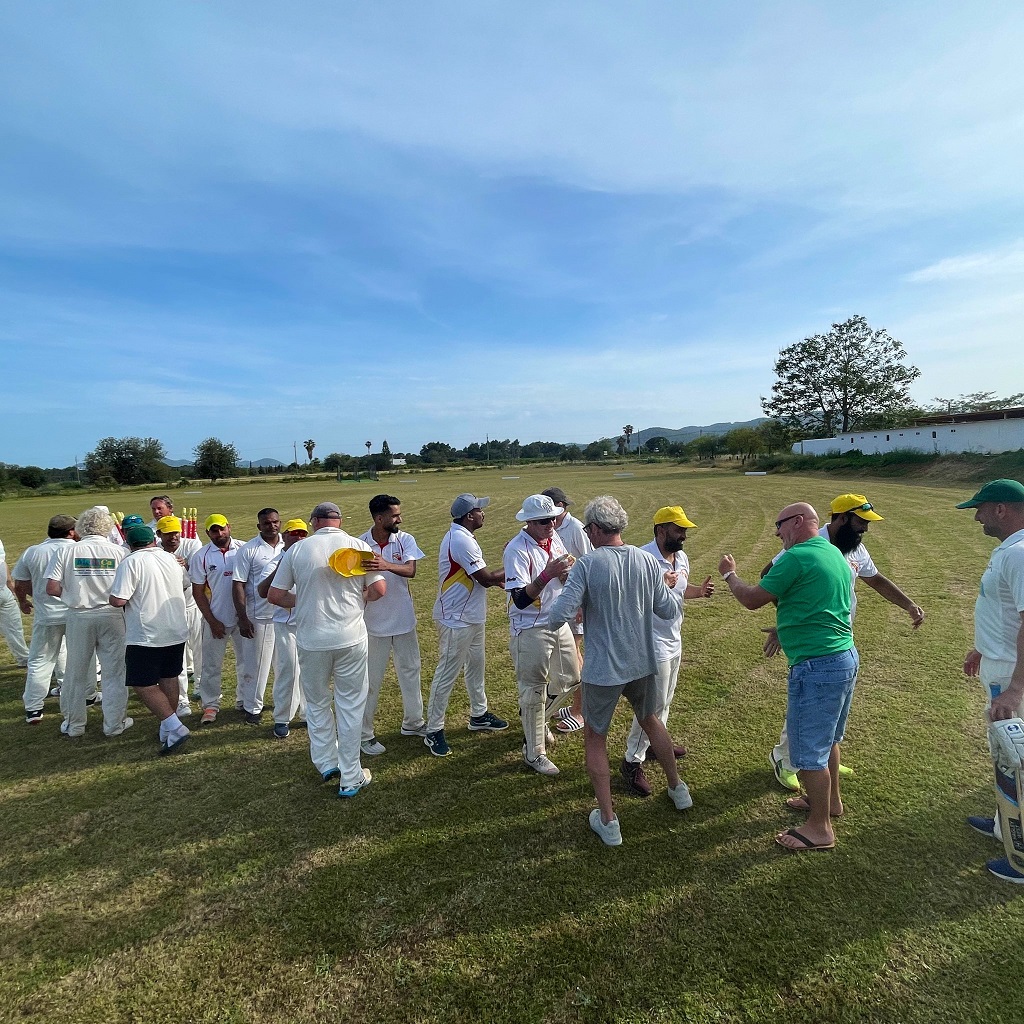 Congratulations to Ibiza, and their success was celebrated in the local press, as cricket in the Balearic Islands continues to grow. Great work is going on with Junior activities in Menorca, Mallorca and Ibiza and the Senior sides have lots of cricket to look forward to this summer. This weekend Menorca host a combined Barcelona Internationals/Andorra outfit, whilst Ibiza entertain Southfleet CC at San Lorenzo next month. Also in June, Mallorca have their first ever Junior event with teams from Madrid and the Costa Del Sol already confirmed as participants. 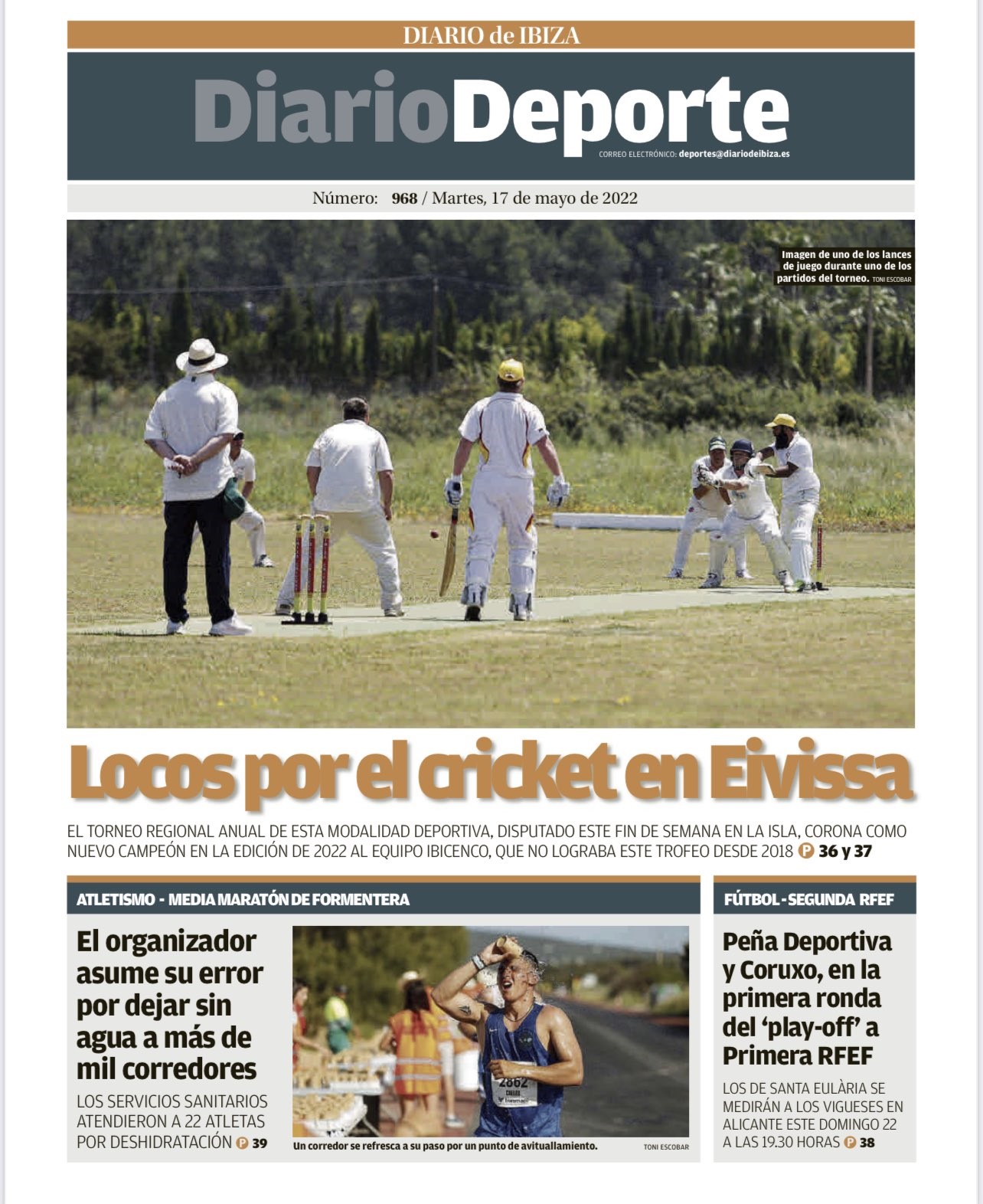 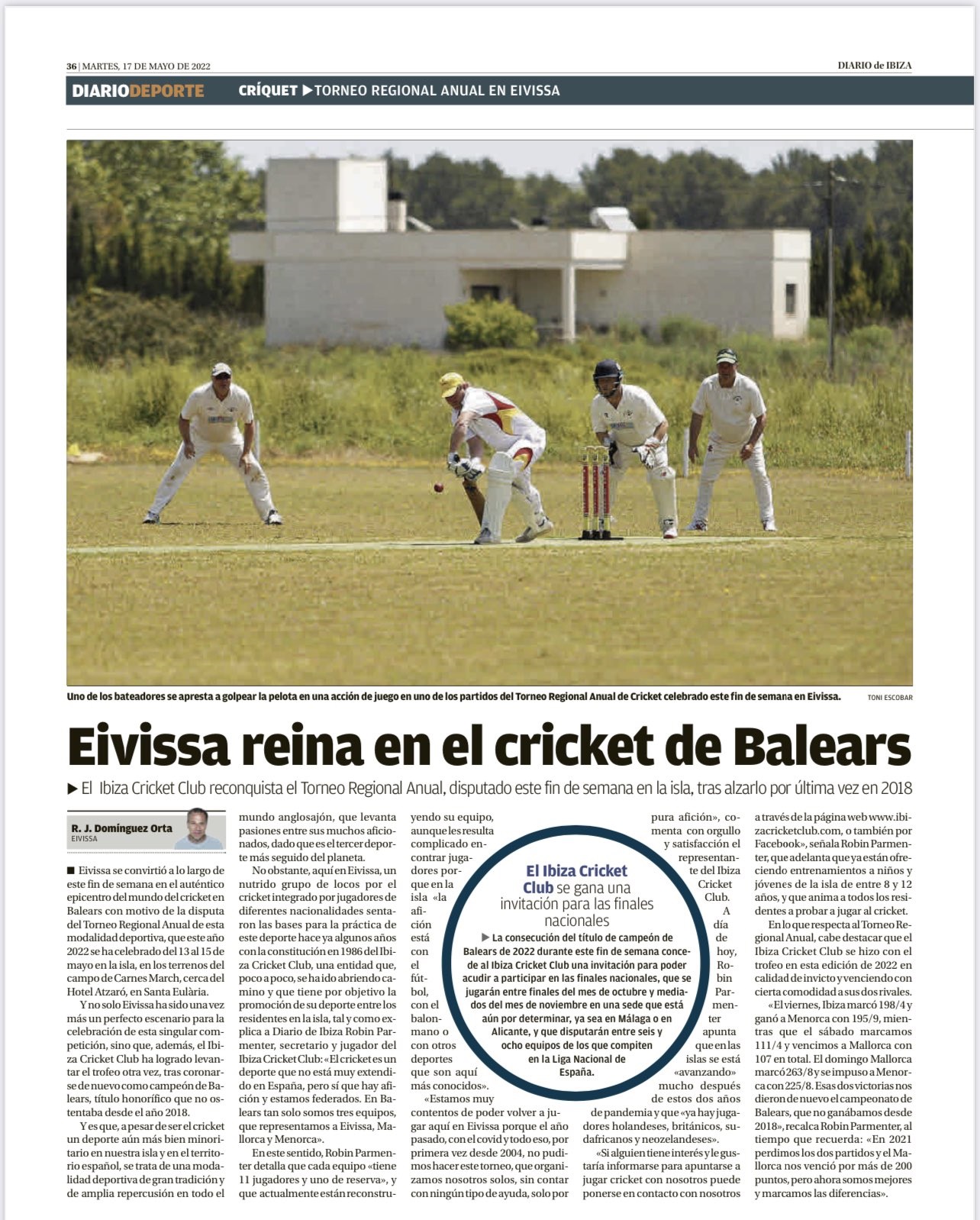 For more information on cricket on the three islands, visit their respective websites ….