Chapter Two in the Series of the History of Cricket on the Costa Del Sol by one of the pioneers of Cricket in Spain, Gregory Gomez. The excerpts are from a forthcoming book that is being written by Greg.

The Potential for Cricket on the Costa del Sol

By October 1985 Greg saw a ‘Big Picture’. The potential for Cricket was huge. Costa del Sol had the climate almost all year round. There were thousands of Brits on the Coast, with more coming all the time. There was much to offer on the Coast. So, why not Cricket! He realised that this was an opportunity to earn a living and provide for Charlotte, but it would require, some serious effort to get it going. He was game. So, he went in full steam ahead.

He needed serious guidance and assistance, both with expertise and finance. He called his father Gerry in Trinidad. For this to work, it had to be done right.

Gerry was delighted to hear of his ‘new’ career choice. Using his position and connections within West Indies Cricket, he was able to get important ‘endorsements’ from the West Indies Cricket Board Officials for Greg. Gerry also assisted him with some finance to ease his situation.

When the endorsements arrived by mail, included were ‘The Constitution of the West Indies Cricket Control Board’ and more importantly, names and telephone numbers of important Officials in the administration of World and English Cricket and in Cricket Coaching matters, in London, who were awaiting his call.

The ‘Meetings’ were arranged for January 1986. He headed to London and through the Famous “Grace Gates” he went, into “The Mecca of World Cricket”. The Lord’s Cricket Ground, St. John’s Wood, London. He spent three days there in intensive talks. He laid himself bare and told of his idea for Cricket in Spain to;

Lt Col Stevenson invited him back to the ICC Offices after the first meeting. He had impressed and came away with the guidelines and requirements needed to be met to enable Spain’s acceptance as an “Associate Member of the ICC’. Once fulfilled, this would grant Spain ‘Financial Support’ from ICC to develop Cricket and an opportunity to play Representative Cricket against the other European Countries within ICC. His personal endorsement for Gregory and the ‘guidelines and requirements’ as well as much documentation, remain in the MCA files.

He walked the Hallowed ‘Long Room’ in the MCC Pavilion, the Indoor Cricket Centre, the Museum and the Grounds whilst in intensive talks with Sir Colin. As a little boy, he had sat on the Great Man’s lap, when Gerry had hosted the English Touring Teams at their Blue Range home. “De little boy reach”!

Mr Keith Andrew and Mr Brian Aspital, of the NCA were greatly impressed and afforded Gregory, Manuals and Videos for Coaching Cricket and offered him the opportunity to take part in “The NCA’s Coaching Courses” and indicated that he would be welcome to be a part of the NCA Coaching Scheme, if successful. 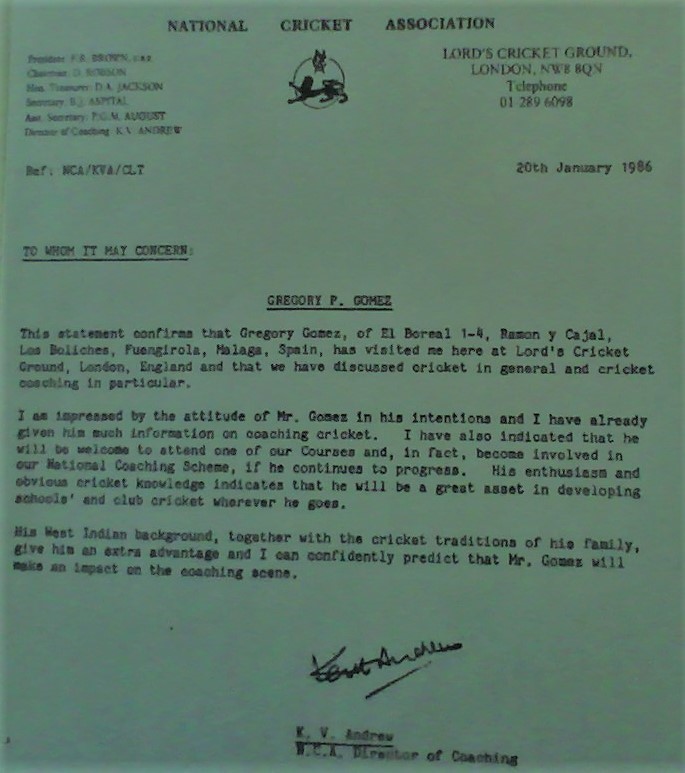 After a short visit to be with Charlotte in Denmark, he went to England in late March/ early April. he attended and successfully completed the Coaching Course at Lilleshall Sports Centre, which finished two days before she gave birth to Peter Flemming. 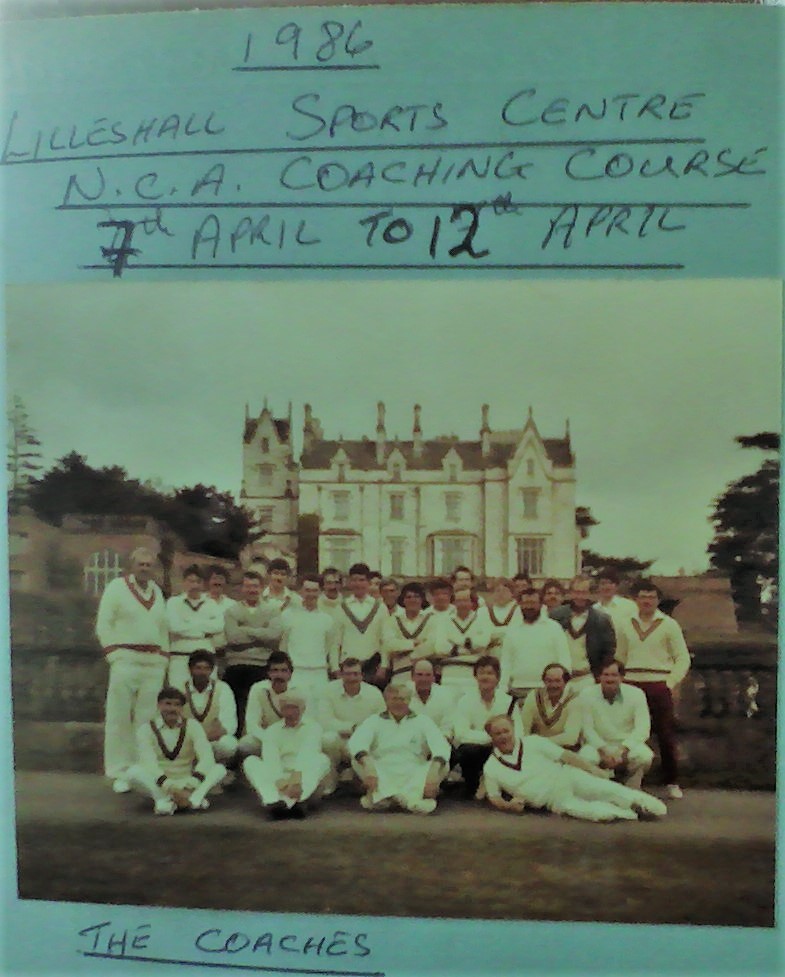 Aside from the “Big Cricket Meetings”, in January, he was introduced to the English Media. English Television, the BBC, Christopher Martin-Jenkins and London Weekend Television – ITV Sport, John Bromley. The Cricket Monthly Magazine and The Cricketer International, Christopher Martin-Jenkins; The Wisden Cricket Monthly, David Frith; The Club Cricketer and Cricket World Magazines, Michael Blumberg and The Daily Telegraph, Jim Swanton. All of whom afforded him some coverage in one way or another over time. 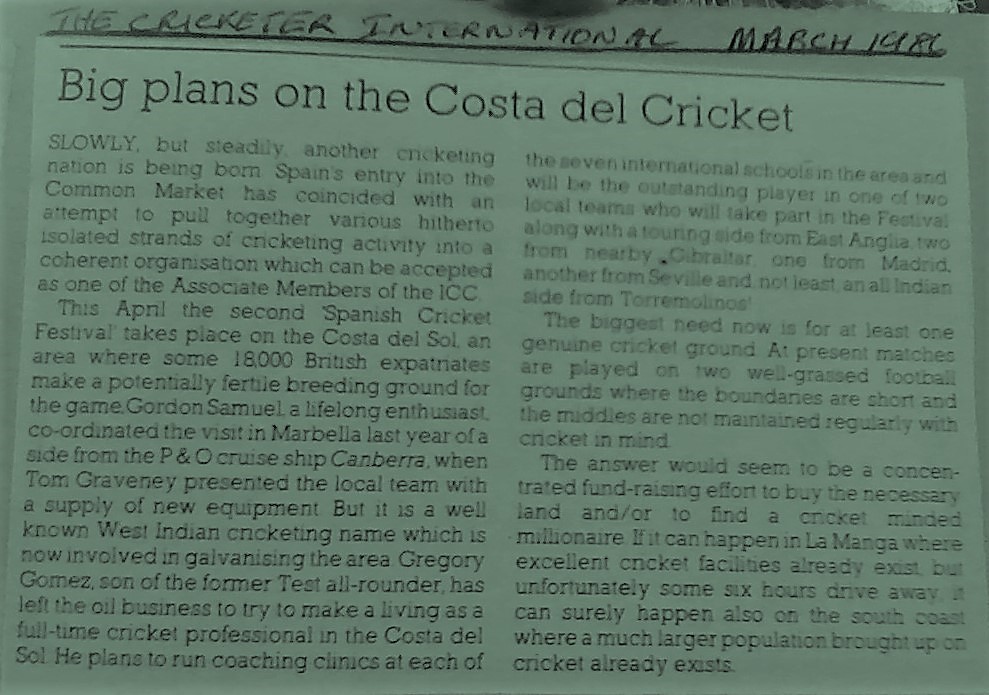 Now back in Spain, he got down to business. He had a lot of work to do. The Cricket Administrators of the Costa del Sol, set about to form an ‘organised body’ for the Control and Growth of Cricket in the Andalucia Region.

On the 17th August 1986, The Malaga Cricket Association was officially formed. Through the generous work of Ian Smith and his daughter Elena Jose Smith, the Association was formally registered with the “Junta de Andalucia”.

Acceptance by the Residents of Edificio El Boreal

By around October 1985, the other residents (all Spanish) of the entire El Boreal Building were becoming a little more pleasant to Charlotte and Gregory. Acceptance pleased Gregory a lot. Being accepted was important to him. It was the sense of being included that did it for him and he knew that his wife would be safe when he was not around, which was now starting to happen a lot. 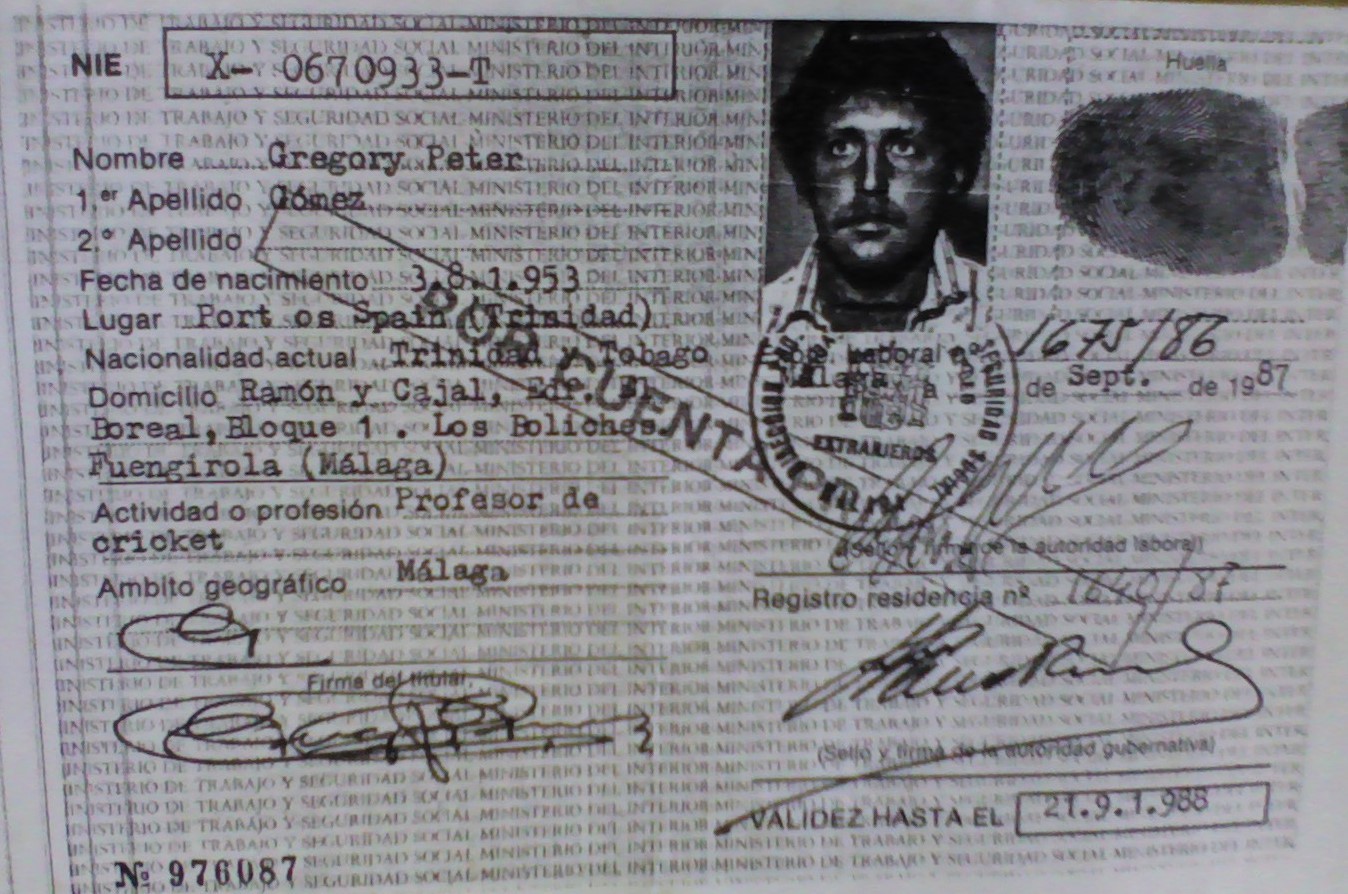 The Cricket Coach was in full flight now. He was striving to be a good provider for Charlotte. ‘Sports Coaching fees’ were low, on par with the cost of living on the coast. Although looking good in the public eye, it, was not looking good on the financial side. He continued ‘doing his thing’. After coaching classes were finished, he would meet with the Fathers of the school Kids to try to encourage them to join the Men’s Cricket. That needed to be developed also and he would reach home late depending on the school’s location. Charlotte became a Cricket Widow.

He was coaching 6 days a week, had Saturday practice also and matches when arranged on Sundays. When he began looking to expand the amount of ‘playing teams’ by wanting to form more Clubs the days got longer, stretching into night as he stayed on later to meet and mix with Parents, Teachers and other men he was introduced to after coaching had finished.

His coaching classes were from 3.30pm to 6.00pm. Two and a half Hour Sessions. Every session started and finished with “Fun” Skills Games. Utilizing Mrs ‘T’, Charlotte and Peter went with Gregory to the schools in the beginning, but she stopped after a short while, preferring to stay at home with her ‘new born’. From now on his time with Charlotte (and Peter), would no longer be as before. 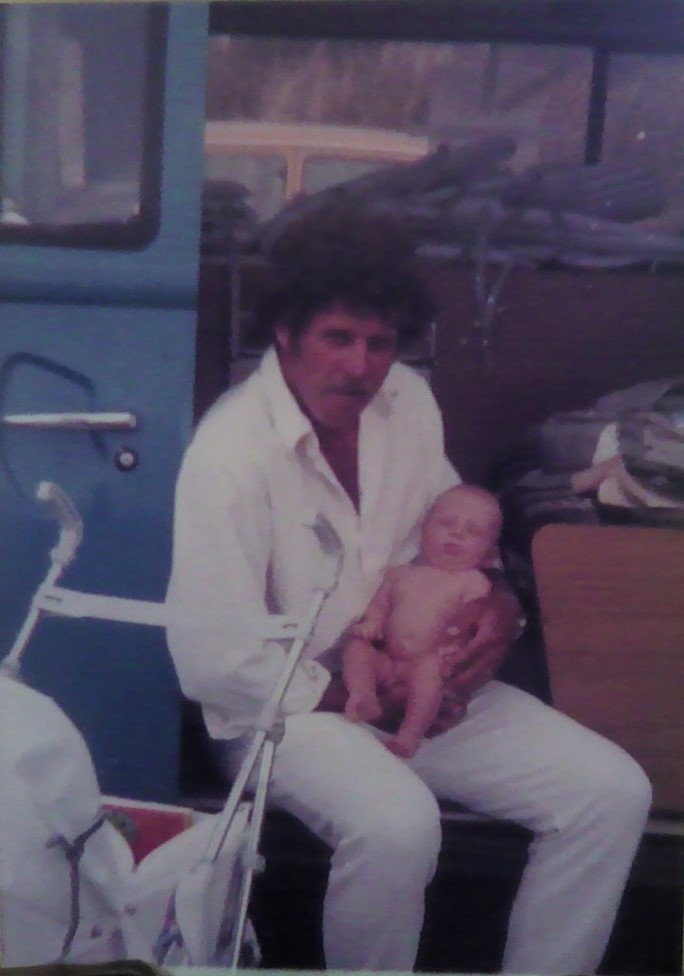 Father and Son before Coaching at Calpe College in San Pedro

History of Cricket on the Costa del Sol Part 1