Chapter One in the Series of the History of Cricket on the Costa Del Sol by one of the pioneers of Cricket in Spain, Gregory Gomez. The excerpts are from a forthcoming book that is being written by Greg.

The start of Cricket on the Costa del Sol

For him, it all began one morning just before he was due back to work, whilst the Rig (The Drillship Polly Bristol) was working off Cadiz. At the Villa, Margaret Winslow (the land lady) came with breakfast as per her usual. With the meal, she dropped a newspaper on the table and said;

“Something to interest you. Cricket has started down here. See. Look”!

She had learnt of his involvement with that Sport. She was a good listener. A very special person during his early time in Spain. Again, Motherly! A good Lady. He read the article and took note of the Contact Person. “Gordon Samuel”. 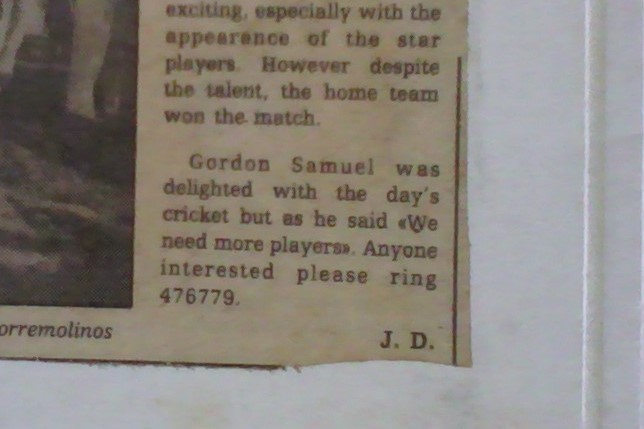 “El Sur” was the most popular Spanish Newspaper on the coast and because there were so many “Foreign Residents”, Extrañjeros, living in Spain, they began publishing ‘in English’, as well.

It was a Weekly Edition. In front of him was a copy of the “Sur in English” article dated, the 3rd Week Issue, May 1985. 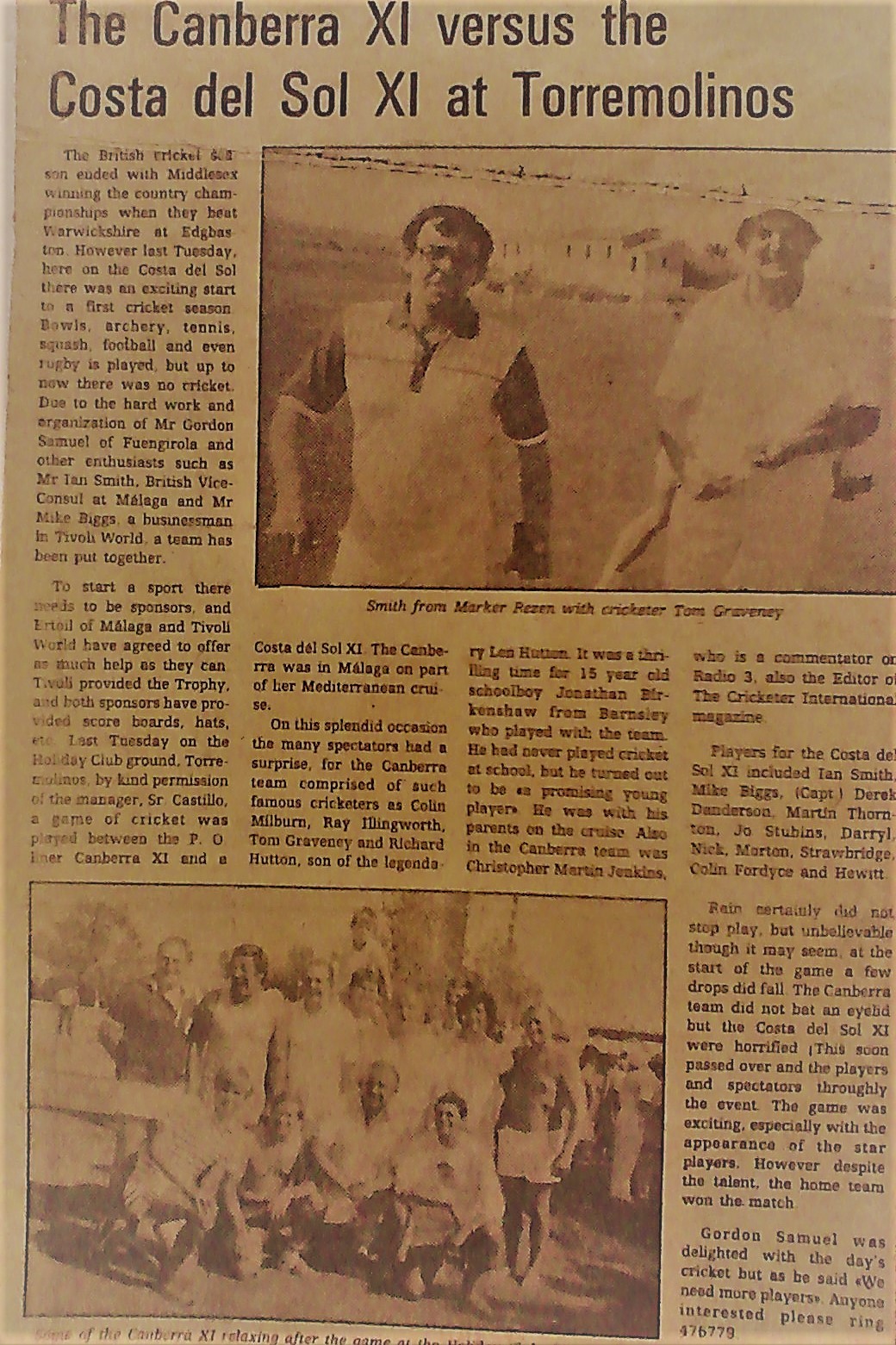 After this article, it was as if cricket had ceased to exist. There was no more news, well in the “Sur in English” anyway. That is until October.

When Captain Ron returned to the Polly Bristol, he showed up with a copy of “The Lookout Magazine” an English Published Monthly, covering the entire Kingdom of Spain. 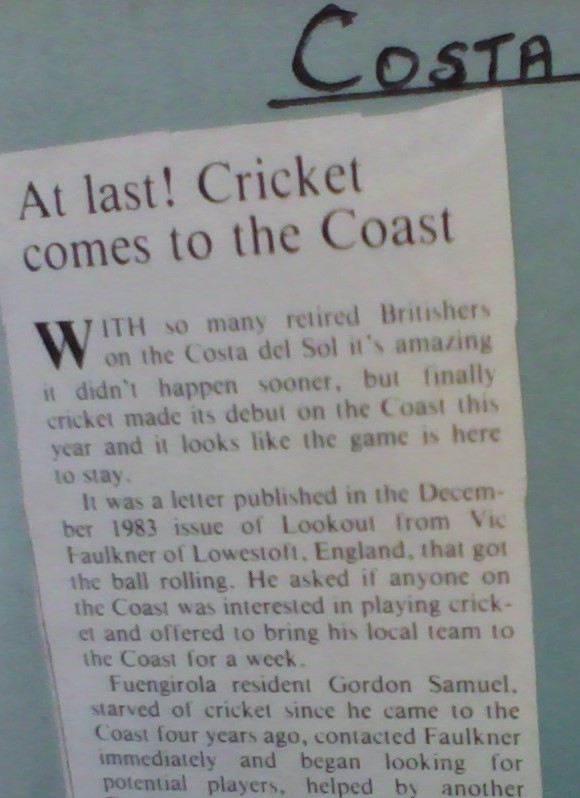 “A Snippet” of ‘The “Lookout” Magazine’ Article, September Issue 1985

Norman Ross made him be aware that an East Anglian Team had come in June and the matches had been hailed as a success. Norm had followed the cricket.

And so, Greg Gomez got involved in Cricket on the Costa del Sol on his ‘time offs’ from work. He called Gordon when he got home on his next time ‘off’.

He was warmly welcomed by Thomas ‘Gordon’ Samuel and Ian Malcolm Smith (Vice Consul for the British Consulate in Malaga) and the rest of the Cricketers and was introduced to the Costa del Sol, highlighted in the Sur in English. 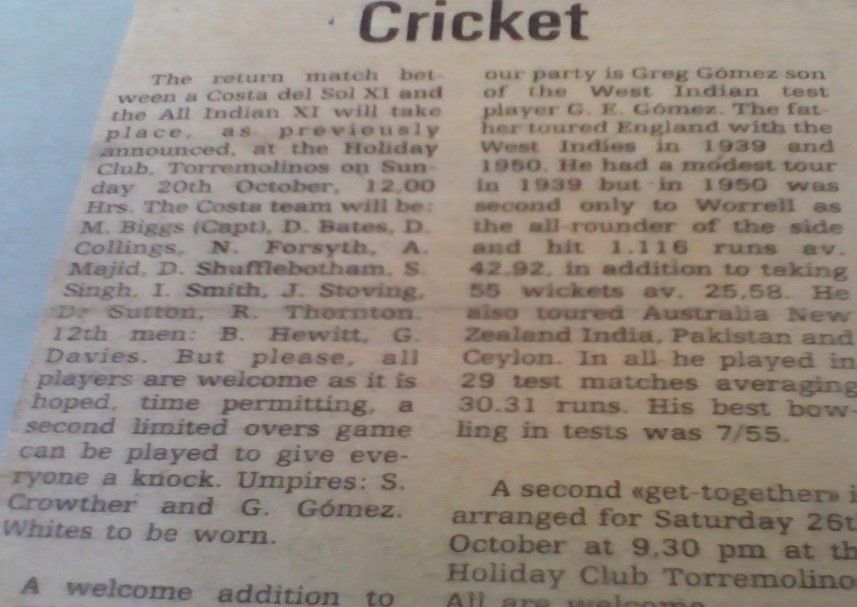 He re-arranged his activities to fit Cricket in.

In his next game he scored 100 Runs, becoming the first Centurion on the Costa del Sol and also taking 5 Wickets for 11 Runs in that Final of the “Mini Series” vs The Indians. 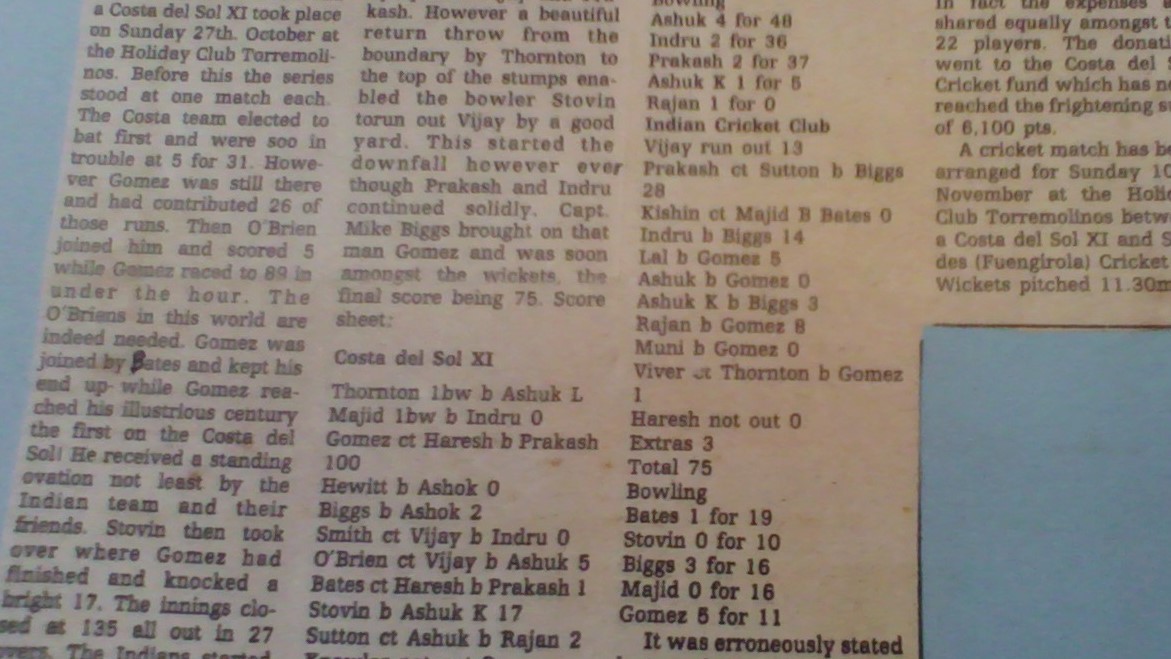 Then Oil Exploration World Wide crashed taking Greg with it. 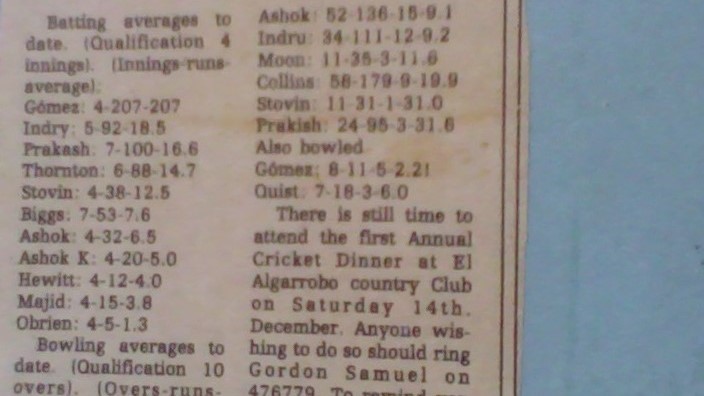 A Three Team Costa del Sol ‘Mini League’ 1986 was organised by Gordon who by now had organised for the playing of Cricket, at two Venues.

The Venue used for the League was “The Torremolinos Beach Club Hotel” located right on the Beach Front, away from the Town Centre, with Costa del Sol CC emerging Champions. 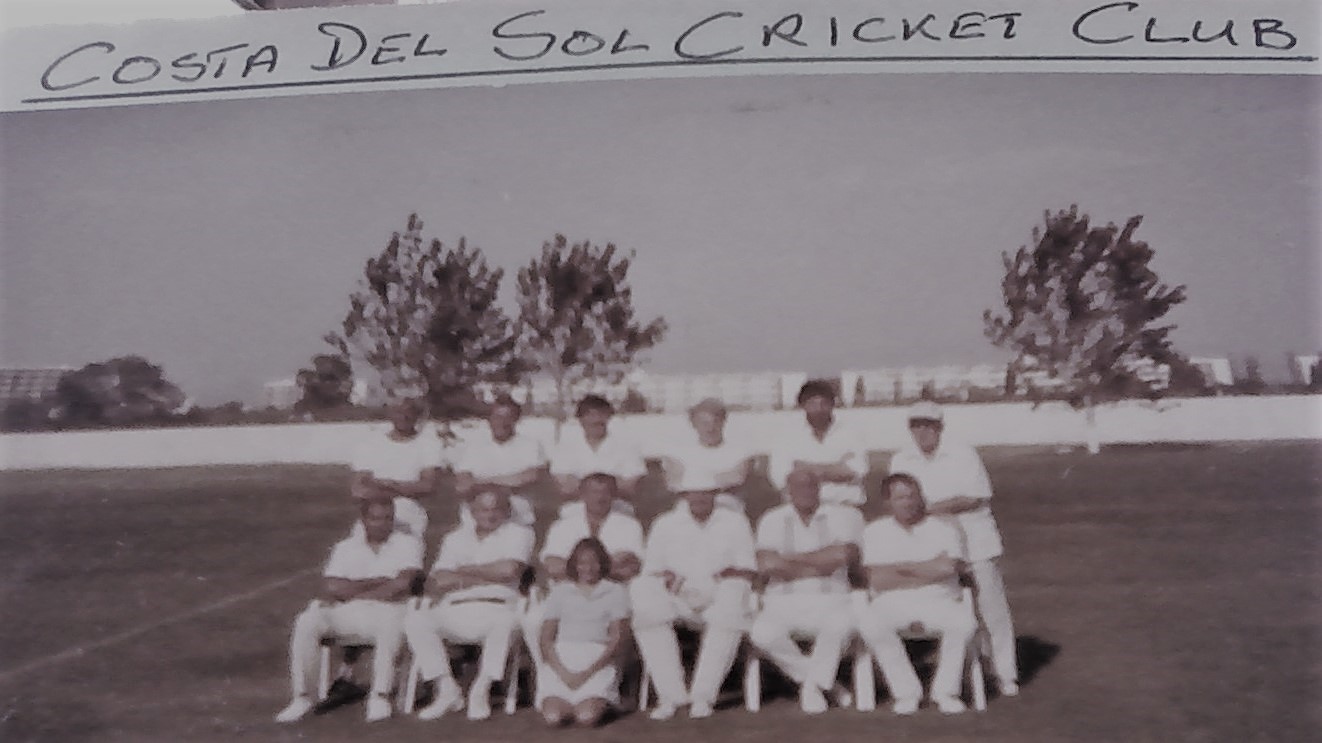 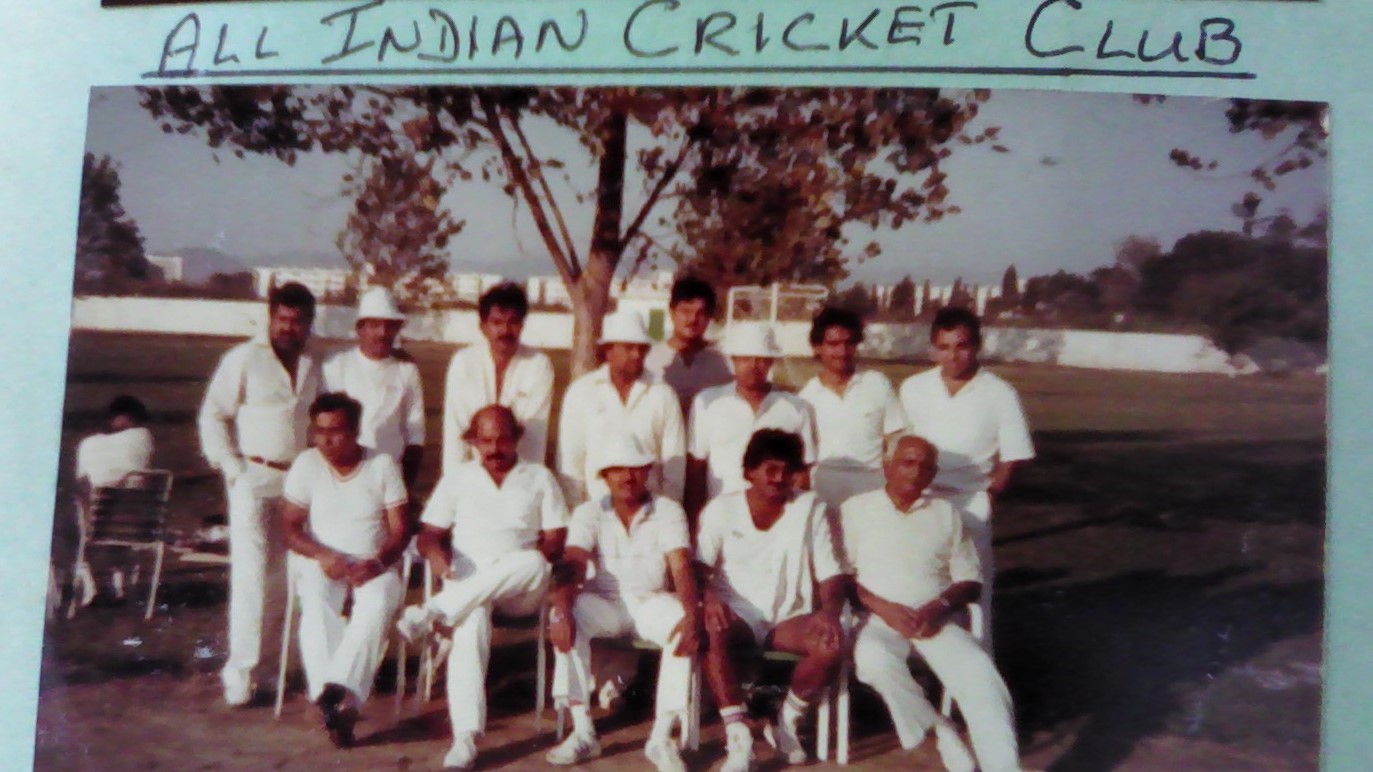 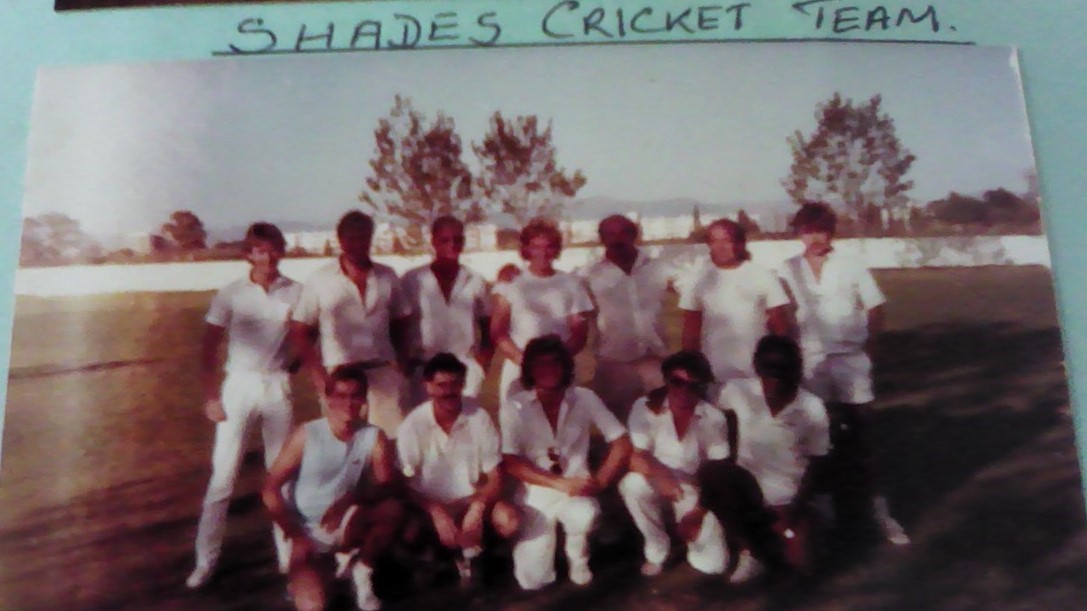