FIXTURES ANNOUNCED FOR ICC UNDER 19 TOURNAMENT IN ESSEX

Fixtures have been announced for the ICC Under 19 Cricket World Cup Qualifier (Europe Division Two) and Spain will be in a group of five along with Belgium, Denmark, Netherlands and Norway.

Group A will consist of only four teams after the late withdrawal of Germany. France, Guernsey, Italy and Sweden will be the teams to compete.

Spain start their campaign on the 31st July at Harlow Cricket Ground against Belgium. The follow up that with a game on the 1st August against Norawy at Harlow CC and then Netherlands at Bishop Stortford College after a rest day on the 3rd August. Spain then finish off their Group stages with a contest against Denmark on the 6th August at St Magaretsbury CC.

After the Group stages teams will play off against the country who finished in the same position in the respective groups with the fifth placed team in Group B finishing ninth. The top three teams will be promoted to Division One.

Spain will announce their squad shortly with the players evenly mixed between personal playing in the ECCL and Cataluyna Leagues. Armghan Khan will be the team coach for the event and Mark Perman will be the Team Manager for Spain.

The squad have already had a practice session and will trimmed to the final fourteen in the next couple of days. 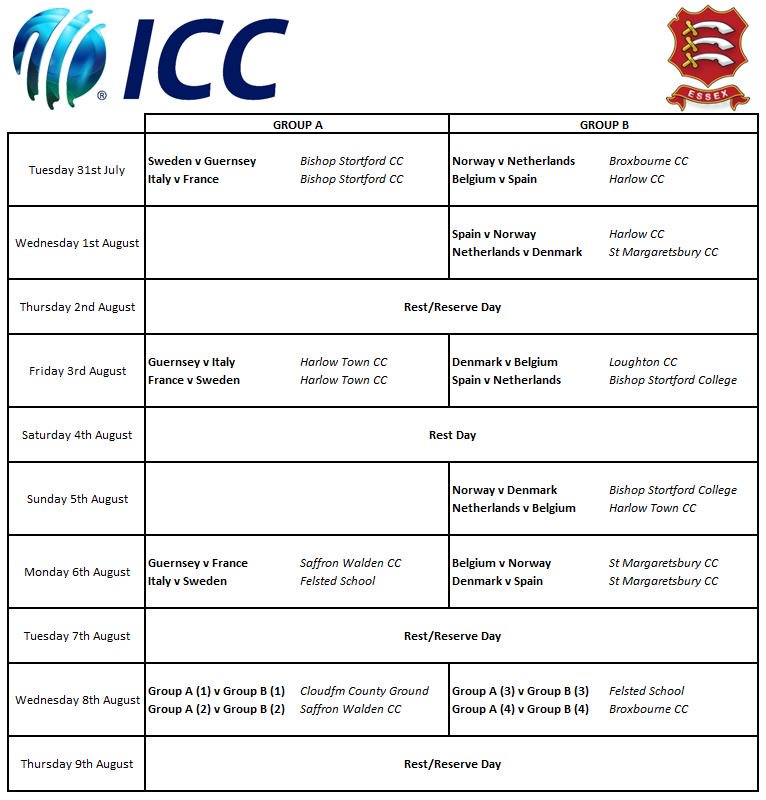