DOUBLE JOY FOR BENGALI AT THE BARCELONA ECS

Bengali had the privilege of participating in the first two games of the ECS 2021 in Barcelona, and they did not disappoint, winning both matches.

The first game of the day pitted them against Men In Blue, and the Men in Green elected to allow Bengali to bat first. Rocking at 5 for two after just nine balls it looked to be a wise decision, but some quick runs from Shafiqur Rahman and Riaz Howlader took Bengali past the fifty mark with just over half of their overs utilised. Rahman continued to punish the bowlers, finally falling in the ninth over for a fine 42. With his dismissal, the Bengali innings failed to gain any further momentum and the last eleven balls went for just eight runs despite having wickets in hand. Bengali CC finally ended their ten overs on 86 for 6 at the interval.

Men in Blue started well and looked to be in command and raced to 45 for 1, in just shy of six overs. However, Bengali dug in and restricted boundaries as their opponents got increasingly nervy as ball after ball failed to produce any significant runs. Despite a fine 51 not out by Shankar Kaligatla they mistimed the pace of their innings and fell three runs adrift of the Bengali score. 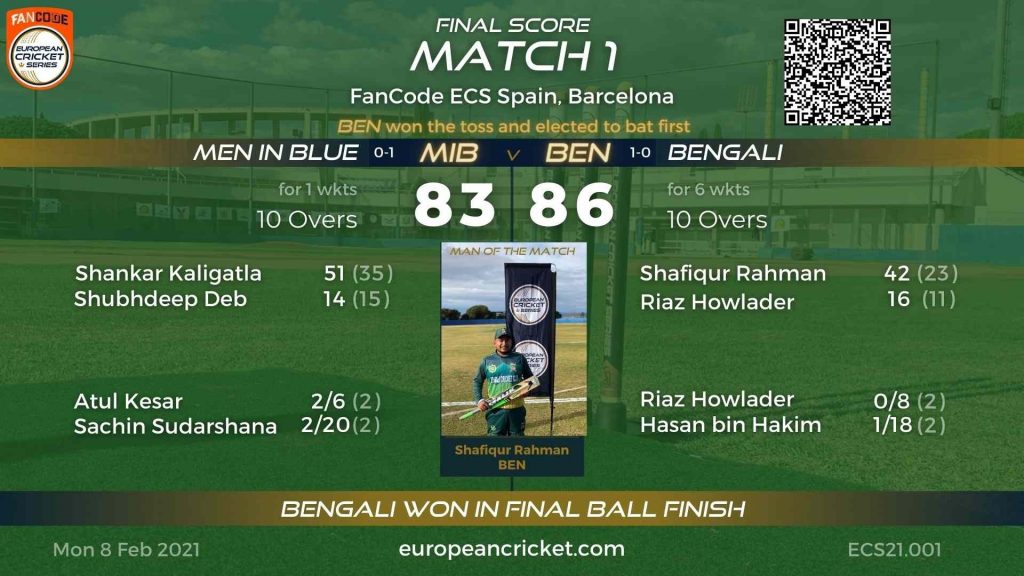 Match two saw Bengali come straight back out to compete in a contest against one of the pre-tournament favourites Cataluyna Tigers. The Tigers had bolstered their team with Armghan Khan and Yasir Ali, as their usual team, Cataluyna CC had chosen to not play in the event due to work commitments to several key players

Batting first, both Yair and Armghan got starts only to hole out to miscues. Ironically, it was another Cataluyna CC player Nadim Hussain that took the catch to remove the latter. Saqib Latif then went on to score a fine 41 not out and give his side a final total of 107 for 4.

Bengali showed strong fighting spirits and defied the odds to scrape home on the final ball of the game. Shafiqur Rahman continued his form from the first match, and ended the game 43 not out, to fittingly claim the man of the match award for the second game in a row.

Unfortunately, not long after that the heavens opened and the rain came hurtling down. The final three schedule games had to be abandoned. Tomorrow, the current ECS Barcelona champions Pak-I-Care open their account against Pakcelona. The game starts at 8.30 am local time and all the games are free to watch on you tube. 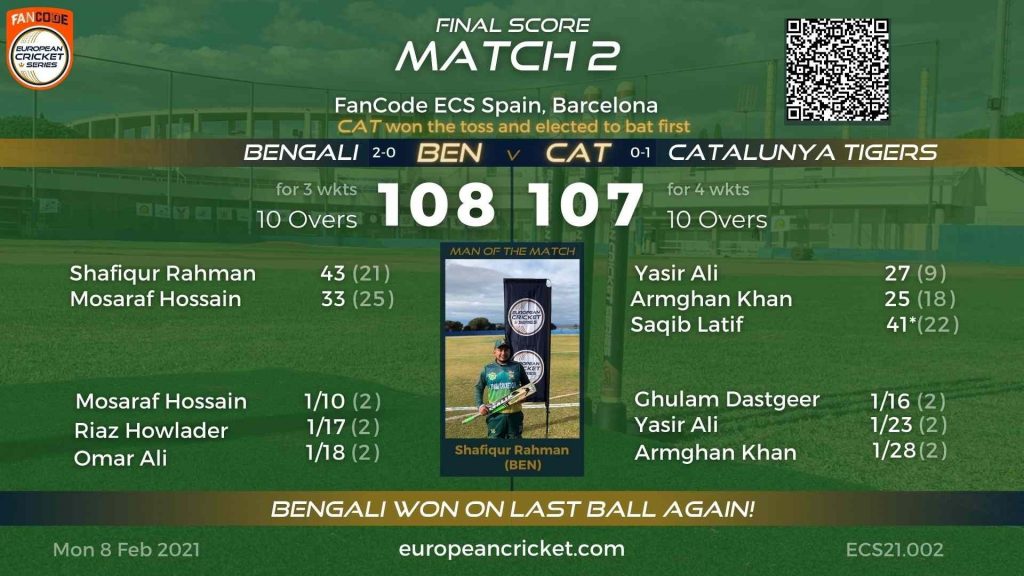