A couple of weeks ago Cricket España were excited to get a call from the Root Cricket Academy inviting Spanish juniors to join 15 of their elite under 15 juniors from the UK at the fabulous Desert Springs resort in Almeria.

The weather for November was amazing and as the parents soaked in the rays while watching their kids from the boundary, the kids themselves  made the most of enjoying their cricket out on the field in glorious sunshine, the academy juniors from England found the weather just unbelievable, and a little too warm!!!

All the kids got on very well together and it wasn’t long before all 36 kids were on first name terms, the friendship and bond they created was evident on and off the field, everyone supporting and encouraging each other, even when they played against each other on the final day.

The training and tips the guys and girls received from the coaches were visible on match day, especially when fielding when direct hits and great catches was the order of the day. All the Spanish youngsters felt they learnt a lot in a short space of time from the coaches; Ben, Tom and Shaun definitely left their mark on the young Spanish Cricketers.

There were excellent all round performances from the home kids and they certainly seemed to have lifted their game with bat, ball and in the field following the intense Training sessions. Following two very close and evenly contested games, the cricket had to come to a close. As the sun started to come down, head coach, Ben Stephens gathered all the kids and their parents round and thanked everyone for two marvellous days of cricket. Our Spanish boys and girls were thanked for attending the academy on behalf of Matt Root and it was hoped that this could develop into a regular partnership with the Root academy at Desert Springs.

Joe Root himself sent a message via video link to all the kids which was awesome, and before everyone said their goodbyes, Ben presented Jamie Riley with a Root academy shirt for being their outstanding Spanish player. On behalf of Cricket España, Rico presented Ben Stephens a plaque for Matt Root and the Root academy as a sign of Cricket Españas appreciation for being invited and involved in such a prestigious camp.

As most people made their way back to their apartments, some of the España juniors did things the Spanish way, as they found a beach and the bat and ball were out again, continuing to play cricket well into the night. 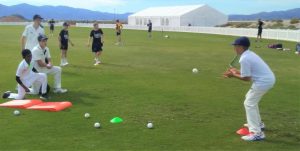 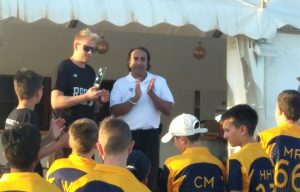 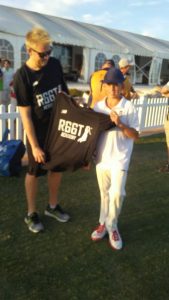 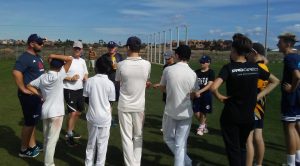