Before social distancing became second nature, before lockdown was the norm and before the dangers of COVID19 were fully apparent, the minds of the Cuttlefish were focused on one thing. Cricket. Every winter is one of discontent for the keen cricketer and this year we had a cunning plan to shorten our suffering. A short jaunt to sunny Spain, to visit some friends and start the season early.

Before first light we huddled outside our homes, breath steaming in the cold English air, waiting for the ever reliable Preash to pick us all up and take us to the airport. By mid morning, we were soaking up the Spanish sun over coffee, outside Malaga airport. What a difference a few hours, (or a thousand or so miles) can make. Our first challenge was a spot of tetris, as we crammed kit bags and personnel into small cars and shuttled to the ground. We barely had time to appreciate our gorgeous surroundings, as we set up camp at the ground, before we made the short trip to town in search of tapas and beer.

Saturday brought the first cricket of the weekend and the Cuttlefish shook fuzzy heads in vain attempts to clear them. Costa Del Sol were up first, one of three 20-20s to be played that day. Keen to make a start, the opposition skipper (unknowingly) took advantage of our captain’s brief temporary absence and did the toss with the nearest Cuttlefish at hand. Having won the toss, Curtis, caught in the headlights panicked and chose to bat, much to the consternation of our immediately returned skipper. Seizing the initiative regardless, the first over went for 11, but the first ball of the second over saw Spav back in the hutch for 1. The Costa Del Sol bowlers eased their way into the game and slowed our progress. By the time Iggy was introduced, we were 58 for 1 off 9 overs and the game was in the balance. Despite a deluge of heckling from the boundary, he struck in his first over, removing AJ. Some good bowling and defensive fielding slowed the run rate and 2 Cuttlefish in a row fell to runouts. Tim’s late flurry of 29, with our first 6 of the year, took us to a solid 155.

Rob and Stan opened up the bowling with great economy, bowling their 4 overs for 23 and 22 respectively, with Rob picking up the first Cuttlefish wicket of the season, getting one opener LBW for a duck. Evan and Spav continued the attack as the Costa Del Sol batsmen found their rhythm. Spav removing the other opener, after a fine knock of 41. Tim was fresh off a handy contribution with the bat and sensing some momentum, the skipper threw him the ball for some leg spin. His first ball was dispatched over the rope, but he finished the over having clean bowled numbers 3 & 4. His next over brought another with a stumping, but more runs. With 139 on the board and an over to go, Evan brought himself back on to bowl, a good choice as the over went for just 9 of the required 17 and the Cuttlefish had their first win of the season.

Having enjoyed watching Gibraltar play Costa Del Sol during the hottest part of the day, we tossed up with Gibraltar for the final game of the day and the skipper got his wish, we’re bowling. One opener made 4, which was great. The other made 81, which was less so. He was only removed by the introduction of young Stan, who having clean bowled the opener with a big leg spinner in his first over, proceeded to rip through the Gibraltar middle order, finishing with a fantastic 4 for 28. Sadly this respite was a little late and we found ourselves chasing an improbable 183. The pace of their quick men was something we were unaccustomed to and they clattered through us well short of the target.

Sunday’s heads were fuzzier than Saturday’s but there was longer format cricket to be had and we keenly inserted the Costa Del Sol batsmen, learning nothing from the previous day’s results. What followed was nothing short of an onslaught, as 4 Cuttlefish bowlers went at over 10 an over. Evan and Rob deserve credit for going at half that rate and Stan again bowled well to claim a wicket. After 35 overs, Costa Del Sol were 261 for 6 and the task seemed unlikely. By the end of our 35 overs, we were only a little over 100 behind.

As the sun went down on both days, the results faded into insignificance as the party started and teams became an irrelevance. The atmosphere throughout the trip was fantastic and only ever complemented by the opponents we faced and the people we met. The vista was perfect, the facilities excellent, the wicket in fantastic nick and the cricket delivered. While this preseason tour didn’t lead nicely into a season of cricket, here’s hoping it leads into many more visits back. 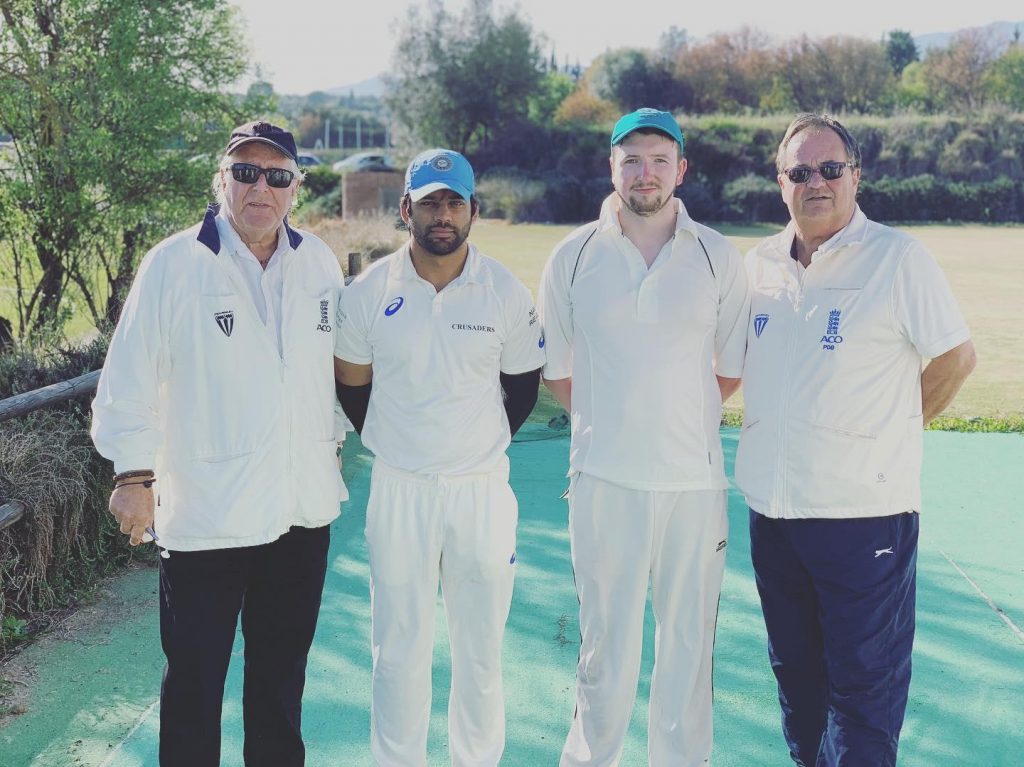