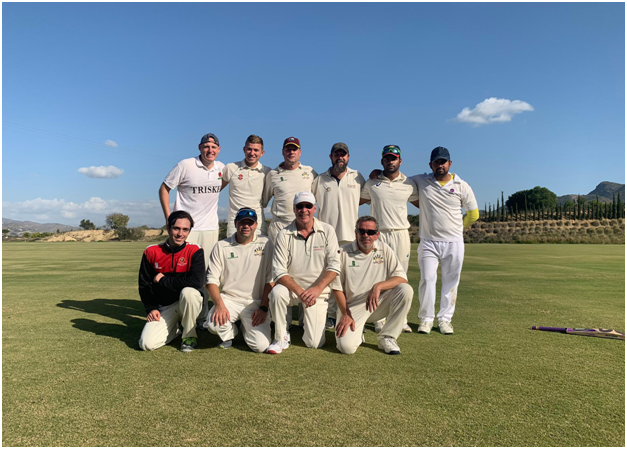 Last Sunday’s narrow defeat to the same opposition – who knocked off the winning runs in the penultimate over of the match – was a bitter pill to swallow. This week, having been put in to bat first, the hosts were determined to right the wrongs of that loss; not just in terms

of posting a competitive total first up, but also by following it up with a particularly tight bowling and fielding effort.

Just as the sun broke through the clouds, giving way to another glorious December day in Southern Spain, openers Jeremy K and Richie strode out to the middle to get things started.

CDSCC, aided by some wayward bowling from the opposition, kept the scoreboard ticking over in the early part of the innings, reaching 49-2 after 10 overs. With Egan Dantis  at the crease and visibly eager to get a good score and thereby provide a solid batting platform, the home side looked to take advantage of a bowling attack that wandered in and out of stump-to-stump discipline.

And Egan Dantis after last week’s debacle, did get to his half century inside 22 overs; hitting some sublime square drives and punishing some rank full tosses through mid-wicket to accelerate his scoring towards the landmark.

Special mentions must also go to Selim Hossain and captain Jay Wild, who supported Egan and rotated the strike well during their partnerships. Ian Higgins excellent running between the wickets and aggressive cameo in the final overs also merit a special mention, gaining CDSCC  valuable runs at the death.

At the end of the allotted 30 overs, the home side posted 212 for the loss of 9 wickets; a total most believed to be a par score on this pitch, considering the favorable batting conditions and the couple of pints some of us had during the interval.

In spite of not setting the away team a hugely imposing total to chase, CDSCC – spearheaded by a great opening spell from Mark Garrett – strangled the visitors for runs in the opening overs and were at the races in the field, too.

An early breakthrough saw Mark pick up one of the All Stars’ openers without troubling the scorers. This tasty starter was shortly followed by an indulgent main course, as the visitors tried to go aerial and served up a buffet of catching chances to the CDSCC fielders.

The hours of intense fielding training, shuttle runs and catching practice seemed to be paying off as Simon took a catch at deep mid-off that came down to the Cartama outfield via Neptune’s orbit, while skip Jay took two blinders in the point region. On the subject of safe pairs of hands, pint-sized Zach was adept with the gloves behind the stumps all game and took a ripper of a catch that flew off the edge and high to his left to dismiss another of the visitors’ dangerous batsmen Manzoor. It turns out size doesn’t matter when it comes to performance (a hypothesis I hoped to be true, in a broader sense, for a very long time). 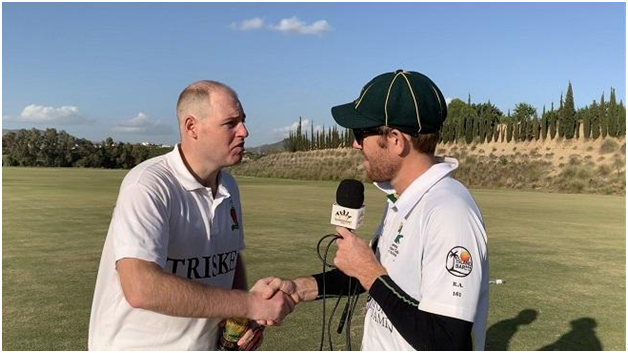 Anyway, back to the cricket. Tight bowling from Mark Garrett and Ian Higgins was backed up by solid spells from all-legs-and-no-hands Harry Scott, Peter gething and Jeremy Knott, all of whom got in on the action with wickets. With their best batsmen Jalal Siddiqui sent back without greatly troubling the scorers, the game looked all but wrapped up at 86-6 when just over half their innings had been and gone.

Despite some spirited resistance from their lower order batsmen, Mumbai All Stars were cleaned up for 148 all out after 22 overs. Egan Dantis confirmed he was alone in the running for Man of the Match after unselfishly giving himself a bowl at the part-time batsmen in the Mumbai Stars tail and putting the visitors out of their misery once and for all. His bowling, execution of 2 run-outs and 57 runs were central to the host’s win and he was the rightful recipient of the gleaming MoM trophy. 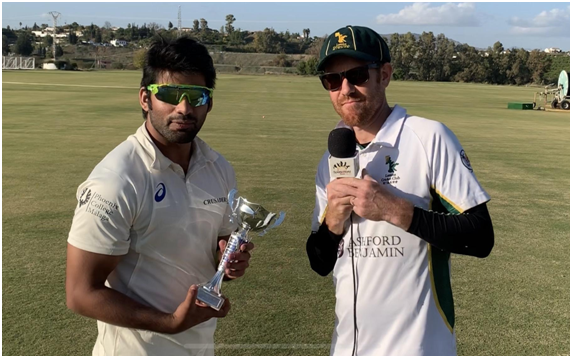 Egan Dantis (Left) was awarded Man of the Match for his batting brilliance.

A much-improved performance from CDSCC meant we ended up winning by 64 runs and could extract some real positives. Notable improvements in the field – under the high ball, saving singles and cutting off boundaries – put pressure on the opposition and disciplined bowling with only 33 extras conceded helped our cause no end. One stand-out potential area of improvement is defending the straight ball (our top 7 were clean bowled), but this is easily rectified by consistent match play and a net session every now and again. There’s a lot of talent in this CDSCC team. We are confident the team will go from strength to strength.

Thanks must also go to Dave for the fantastic venue and upkeep of the pitch, Bully for live commentary worthy of a guest spot on Five Live (and epic one-liners), as well as everyone else that make these enjoyable fixtures possible.