Despite a late surge from Gracia CC it will be Cataluyna Tigers who qualify for finals day from Group A. At the top of the table leading into the the last day of matches it was still conceivable that Gracia could overtake the Tigers. Despite being four points behind they still had three matches to play to the Tigers two, and one of those matches included a clash between the two titans.

The lead that the Tigers had at the top of the league was cut into as Gracia beat XI Stars by 29 runs (Duckworth Lewis method) in a rain restricted first game. Fateh then compiled misery on XI Stars by claiming victory in Game 2 by 56 runs to finish a respectable fifth and above the XI Stars in the six team group.

The third match of the day brought Gracia and Cataluyna Tigers together and it was Gracia that came away victorious. They overtook the Tigers total of 92 with four balls to spare to draw level on points with their arch rivals.

With one match each left to play Gracia put the pressure on the Tigers with a convincing win over Men in Blue. Conscious that net run rate could be a factor Gracia overtook the 91 set by their opponents in just 30 balls.

Going into the last game the Tigers knew nothing more than a strong victory over Bengali would be enough to qualify. Bengali had been the early Group leaders but had fallen by the wayside in their latest matches so it was a difficult contest to call. However, Cataluyna Tigers brought their “A” game to the table and hit 174 from their ten overs, with Mustansar Iqbal starring with an unbeaten century. Bengali batted capably but only managed 114 to allow the Tigers to romp to a 60 run victory.

That convincing win was enough to edge Gracia out by the narrowest og margins on Net Run Rate as both teams finished with 7 wins, 2 loses and one no result. 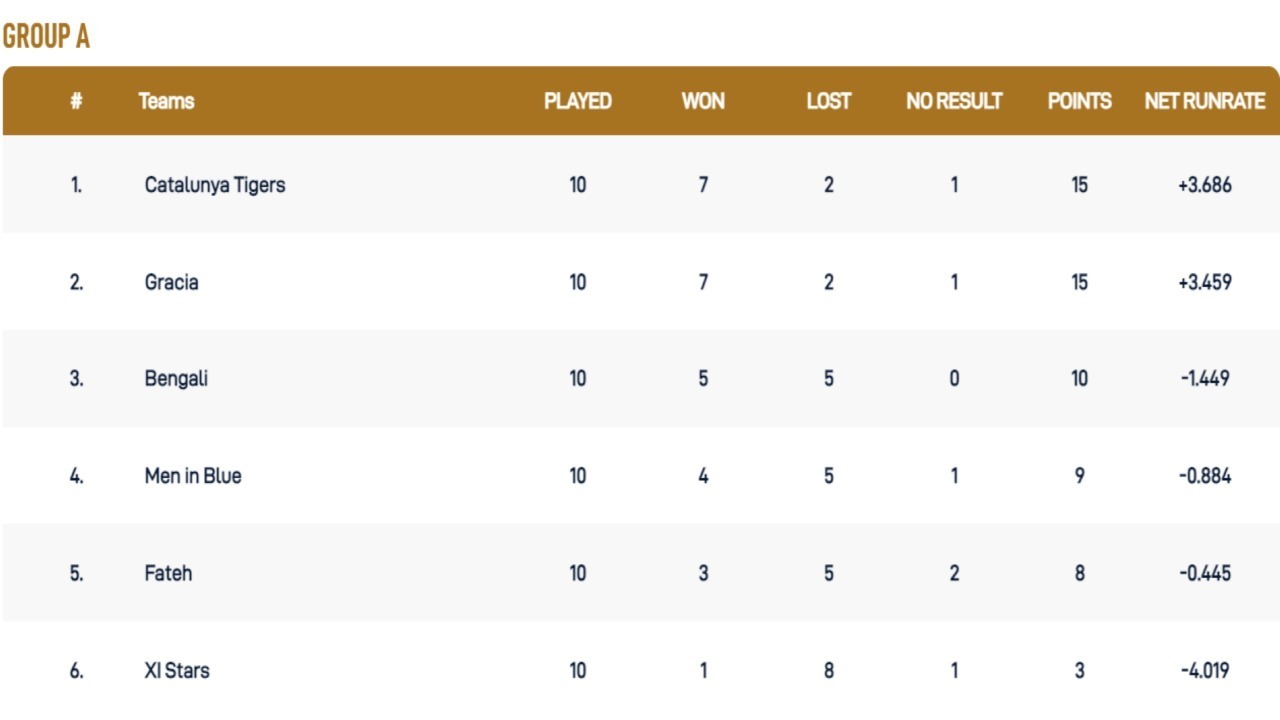