Barna Royals came out on top last weekend and were crowned the Junior Champions of Cataluyna after overcoming Pak-I-Care in the finals at Montjuic.

Matches started early in the day with both teams playing each other for an automatic spot in the final. The Royals batted first and hit 153 for 5 from their over allocation. Syed Hashim Mir Ali Hamdani hit 56 and Usama Shahzad 41 as Barna set Pak-I-Care a very competitive run chase.

Unfortunately, they struggled from the off losing Atif Muhammad andMubashar Irshad for ducks, and with it went any realistic chance of winning the game. They finally ended the game 69 all out in the eleventh over to give the Royals an 84 run victory and passage into the final.

Next up was Sabadell v Badalona with the winners facing Pak-I-Care and the losers going home. Badalona batted first and struggled, scoring only 63 before being bowled out in the eleventh over. Sabadell strolled past the required total in the ninth over for the loss of only one wicket. Spanish international Nadim Hussain took four wickets for five runs and his team mate Asim Ashraf Khan Ali also took four wickets to ensure Badalona a play off with Pak-I-Care for the other final spot.

Sabadell batted first against Pak-I-Care and amassed 104 for 9 in their innings. Numan who hit 29 was the top scorer,but 39 extras ensured Sabadell inched over the three figure mark.

In reply, Pak-I-Care went resolutely about their business and surpassed the required total with five balls and four wickets to spare. Mati-Ur-Rehman Malik was the architect for his sides victory. The opener hit a well crafted half century before falling with the score on 76 in the 13th over. Muhammad Safi and Sami Ur Rehman put on an unbeaten 21 for the seventh wicket to ensure a rematch with Barna Royals.

The final was a much closer encounter than the first game of the day, but produced the same outcome with Barna just winning the best match of the competition, by just two runs. Royals made 99 all out and it looked like Pak-I-Care would be victorious. However, the pressure got to the Pak-I-Care batsmen and they slightly mis-timed their run chase to finish their innings on 97 for 7, and give Barna Royals the trophy.

Many thanks to all six teams who played in this year´s competition and plans are already afoot for a bigger and better league for the Juniors in Cataluyna next year. 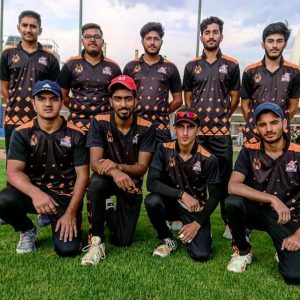