BARCELONA INTERNATIONALS – A REVIEW OF 2020

2020 has been an obviously difficult year, with the club only managing nine games (as well as two internal practice matches). Four of those games came way back in January and February, and the year has been very stop-start since then. Despite everything, we eventually managed to finish and win the Slog Fest T20 tournament that we ourselves organise, and won seven of the nine games that we played. We also managed to get away to Menorca for our sixth tour there, playing against a new opponent in Mallorca CC as well as our old friends Menorca (and beat both of them in tight games). Even with a lack of playing (and socialising) possibilities, as many as seven players have made their debuts for the club this year, with a 16-strong squad heading to Menorca, giving new captain Sid Tewari and new vice-captain Stu Boyd something of an unprecedented selection headache. The club has reactivated its social media accounts (Facebook, Twitter and Instagram) and has just opened its own YouTube channel, https://www.youtube.com/channel/UCpqPClwtlYmYgepdo4BjEmg/featured so be sure to follow what’s going on there. There have been plenty of positives in a tricky year.
Of course, 2020 wouldn’t be without its sadder moments (for the club, at least) and a number of important players have moved on from the club for differing reasons, some albeit temporarily. Joe announced he was moving to Madrid; and Warren put himself on paternity leave. He was followed by outgoing captain Mohsin Nawaz, who stepped down after the Slog Fest Final in September to concentrate on his family life for a while. Also this year, our previous president Rob announced he was hanging up his boots after many, many years as a stalwart in the club. We know that they’ll be back in some shape or form sooner rather than later!
Fortunately, we’ve managed to gain several new players this year, with some newbies to Barcelona and others desperate for any excuse to get out of the house. Welcome to the club Oscar, Umair, Rez, Kevin, Martin, Jack and Tom! And of course, after years as the BICC bridesmaid/ vice-captain, Sid Tewari got his chance and became the club captain, and is currently three wins from three (although, he did manage to lose the internal practice match to yours truly…).

The year started off very positively, with a convincing win against Badalona thanks to 50s from both openers, Sid and Hamza. Their monster opening stand of 130 doing the damage and causing three players to end up with a TFC (Thanks For Coming) award! Two weeks later, the same openers scored big again, getting out in the 40s. This time however, chasing Fateh’s 162/6, we somehow collapsed to finish a run short with just one wicket left intact.

In February we played two more games, this time in consecutive weeks. The first was the second league fixture against Fateh and they set a higher target of 174 to win. BICC chased it down in under 17 overs thanks to 43* from the returning Bruce and an incredible 77* off just 30 balls from Stu to complete their second 9 wicket win of the season. The following week, due to a double-booking of the pitch, our league match against Men in Blue turned into a 5-over slog, in which our opponents just came out on top. Little did we know that it’d be our last match for over four months…

Cricket and life were shut down from March to June, causing the postponement of our Menorca tour due in April and the delay of our league matches. Fortunately, the rules allowed a group of up to six to play sport at certain hours of the day from the last week of May. That weekend and throughout June a number of the most keen players went for a net session on a Saturday morning before we were allowed to play again in July.

July 4th came and we were facing Rising Stars in the Slog Fest. They batted first and set an under-par 132, restricted by 4 wickets from Stu. The runs were quickly and easily chased down, thanks in part to Wides being our second top scorer and the victory assured our place in the league play-off final with 2nd place in the league. The previously postponed Men in Blue match from April was scheduled for the 18th, only to fall foul of the reintroduction of restrictions. Nets continued throughout most of the summer, but we would not play again until September…

Of course, as soon as restrictions allowed us to play again, it decided to rain on a Saturday morning. As a result, our final league game against Men In Blue was called off for the third time, so we proceeded straight to the final the following Saturday. MIB arrived to the final unbeaten in their seven league games and full of confidence. We won the toss and chose to bat and went on to score a mammoth 210 thanks to 130* from Stu, the first century scored on our home ground. MIB never really got close to the run rate, ending on a normally competitive 177. BICC won the cup!

We organised the traditional start-of-season pairs match the following weekend, following a flurry of interest in joining the club and as many as 14 members both new and old (and ancient) turned up, despite those living outside the city not being able to come. No idea who won but it definitely wasn’t me!

October was set to be a busy month, with the start of the new Slog Fest tournament and a weekend in Menorca. We kicked off the league campaign with an easy win against Badalona, the first match under the full-time stewardship of Sid Tewari. Just like the first game of the year, it was a big opening partnership (97) between Hamza and Sid that set the way. Our next game against Raval Sporting was postponed due to new Covid restrictions but we were still allowed to travel and sport in Menorca was permitted so our tour the following week went ahead.

On Saturday, we played a 40 over game, a welcome break from the T20s, against the hosts Menorca. Despite the longer game, the scores were very similar to what we experience in Barcelona. MCC set 167 to win and, after some early wobbles, Umer (63*) and Stu (45*) saw BICC home with 11 balls to spare. The following day we faced Mallorca CC for the first time, back in the familiar format of a 20-over game. It was a low-scoring affair, with Mallorca scoring 105 all out. Opener Umair scored a steady 46, getting out in the last over, to be the backbone in BICC’s successful chase.

Sadly, the restrictions put in place in mid-October have yet to lift so Mallorca turned out to be our last game of the season. It’s also not clear when we’ll be back on the pitch at all, with even small groups for practice or nets not allowed at the moment.

Sid was the only ever-present this year, playing in all nine games, captaining six of them. Hamza and Anish both managed eight, with Umer, Stu, Damien and Leandro playing in seven.

(Brief) Words from the President

It’s been a tough year but it’s wonderful to see the team grow and stick together through all of this. I’m looking forward to what the future holds, hopefully we’ll be back soon!

Words from the Skipper

Firstly, would like to thank the president Damien and Mohsin for handing over the captaincy post our finals victory in September.

Not been a great year in terms of number of matches played due to consistent interference because of Covid regulations.

But definitely grrreeeeeaaaaattttttttt in terms of new additions to the BICC family and also a successful Menorca tour and overall high percentage of victories.

Looking forward to 2021 to have more action on the field and continue our fine form in the second edition of Slog Fest followed by tours to come during the course of the year.

Until then, enjoy the end of the year and best wishes and regards and good health to all.

See you all soon on the field. 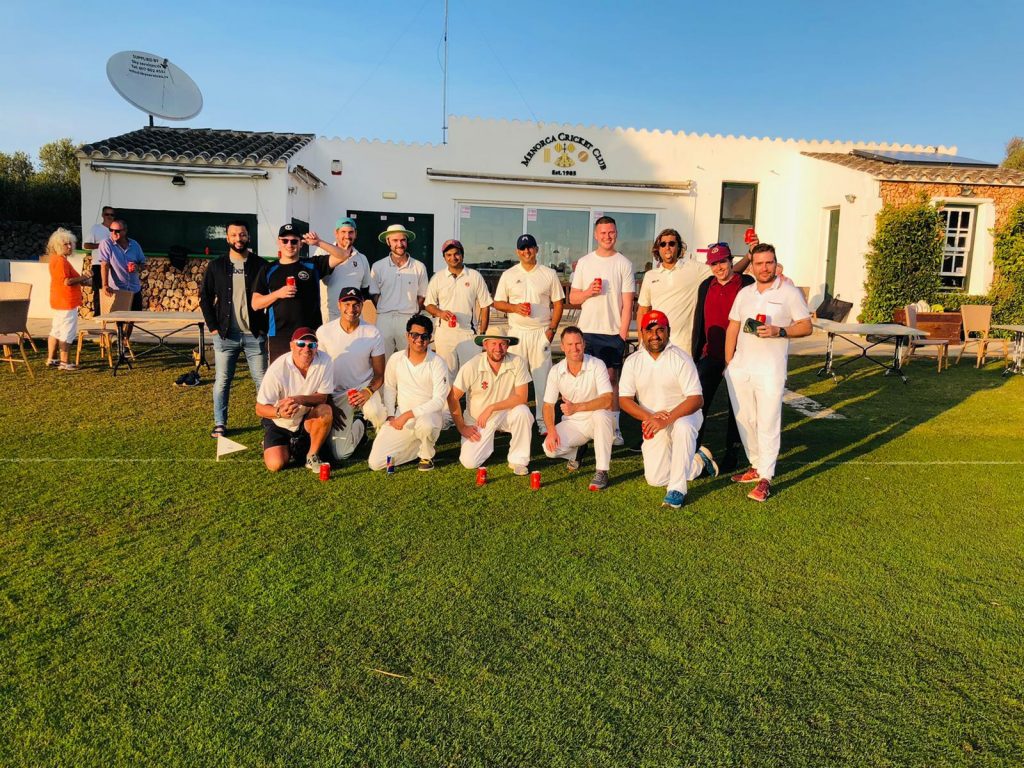