Match Day 4 of the league started with cloudy & overcast weather conditions, but a full game of 35 overs was achieved for this head-to-head between Costa Del Sol CC & Malaga CC.

Both Batsmen looked good at the crease as they kept scoring at a brisk pace, hitting boundaries at regular intervals to keep the scoring at a run rate of 6 per over to finish the first 10 overs with the score at 60/0.

In an attempt to push on with the solid base, Lee Rimmer got caught by Jack off the bowling of Avinash Pai for a steady 23. That brought Gurnam Singh in who kept the runs ticking along with good rotation of the strike, scoring 1s & 2s but the boundaries became harder to come by as Malaga CC kept the pressure on with some tight bowling from Mohsin Shahzad, Avinash Pai and Maanav Nayak in the middle overs.

Opener Phil Hall then got run out after scoring 46 runs as the Costa Boys were reduced to 96/2 after 20 overs. Kenroy Nestor came in at 4 but then Gurnam got bowled by Maanav for 11 trying to push on with the score. Captain AJ (Andrew James) came to the crease at number 5 joining Kenroy as both looked to pick up the momentum before Kenroy was run out for a quick 13 runs.

This saw young Jaime Riley come to the crease who’s cameo added 14 more runs to the total before getting clean bowled by Mohsin. AJ was soon to follow hitting out to Maanav’s accurate spin bowling for 21. This left the Costa innings close on 180/7 for their 35 overs with some useful runs down the order from Ian Higgins (Iggy) & Richard Cunningham. 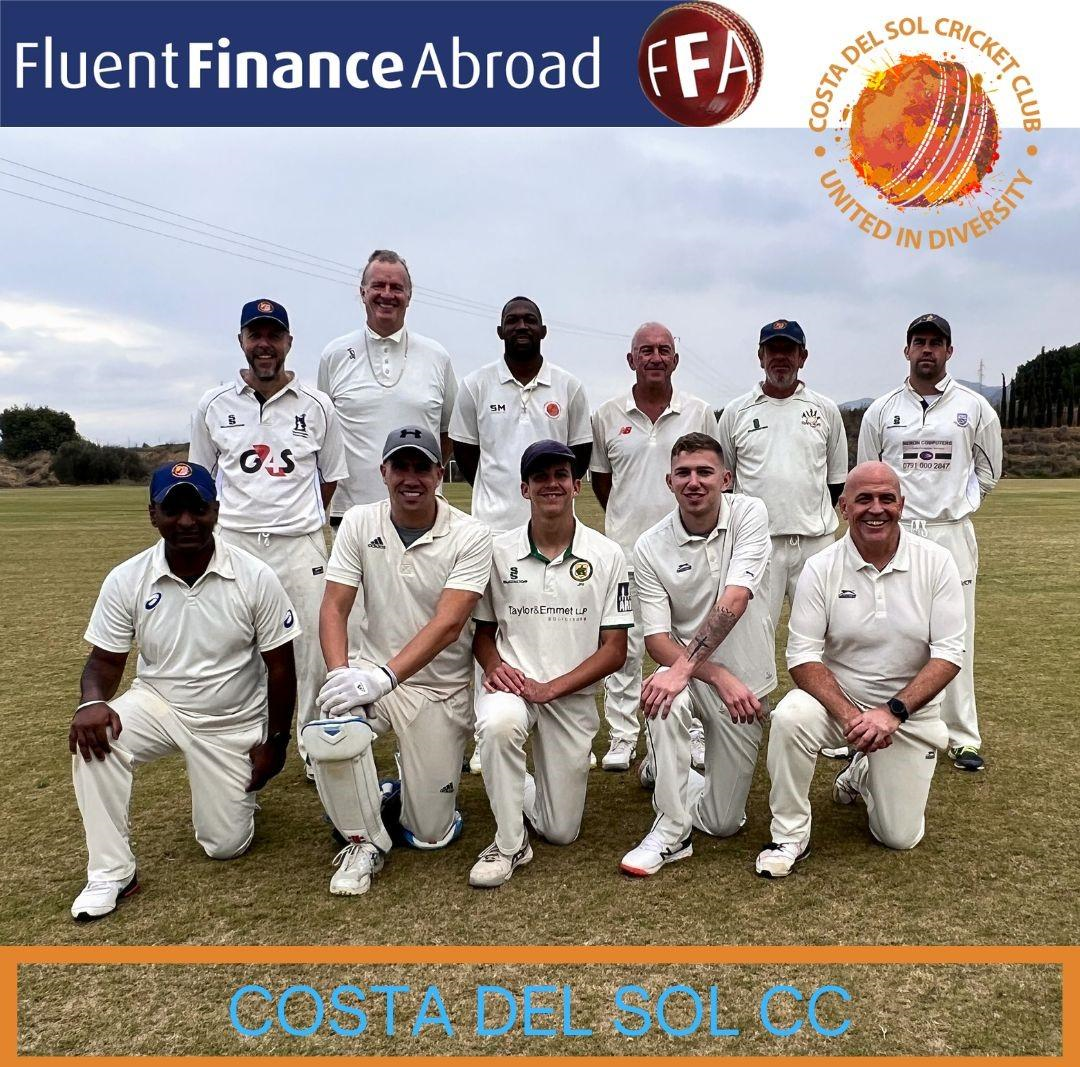 The innings started with Costa gaining the initiative with a dramatic run-out, as Jaime deflected the ball onto the stumps at the bowler’s end off a straight drive from Nadeem to find Asad short of his crease and dismissed for 0.

That bought Maanav to the crease at 3, who along with Nadeem hit regular boundaries to keep the scoreboard ticking above the required run rate. But both then fell to Jaime in quick succession as the game looked to be in the balance with some good work in the field from the Costa team early on.

With Avinash in at 4 and off the back of his unbeaten ton the previous weekend, CDS CC knew he would be a key wicket if they were to hold out before the total was reached.

Support came and went in the shape of Asim, Nauman, Naeem & Mohsin who were all dismissed quickly as Jaime and Lee Rimmer both got 2 wickets to dismiss the four Malaga batters. This derailed Malaga somewhat who had now lost 7 wickets with more than 100 runs still required.

But with Avinash still batting at one end, his cool head meant the score was always being added to as he played some stylish shots which saw a decent partnership build for the 8th wicket alongside debutant Jack Horrocks.

Had things remained as such, Malaga could well have seen things home but Costa captain AJ, called upon the guile of Phil Hall, who responded with a wicket as Jack played a pull shot that which went straight to Lee at deep mid-wicket who welcomed the opportunity to reduce Malaga to 8 down. 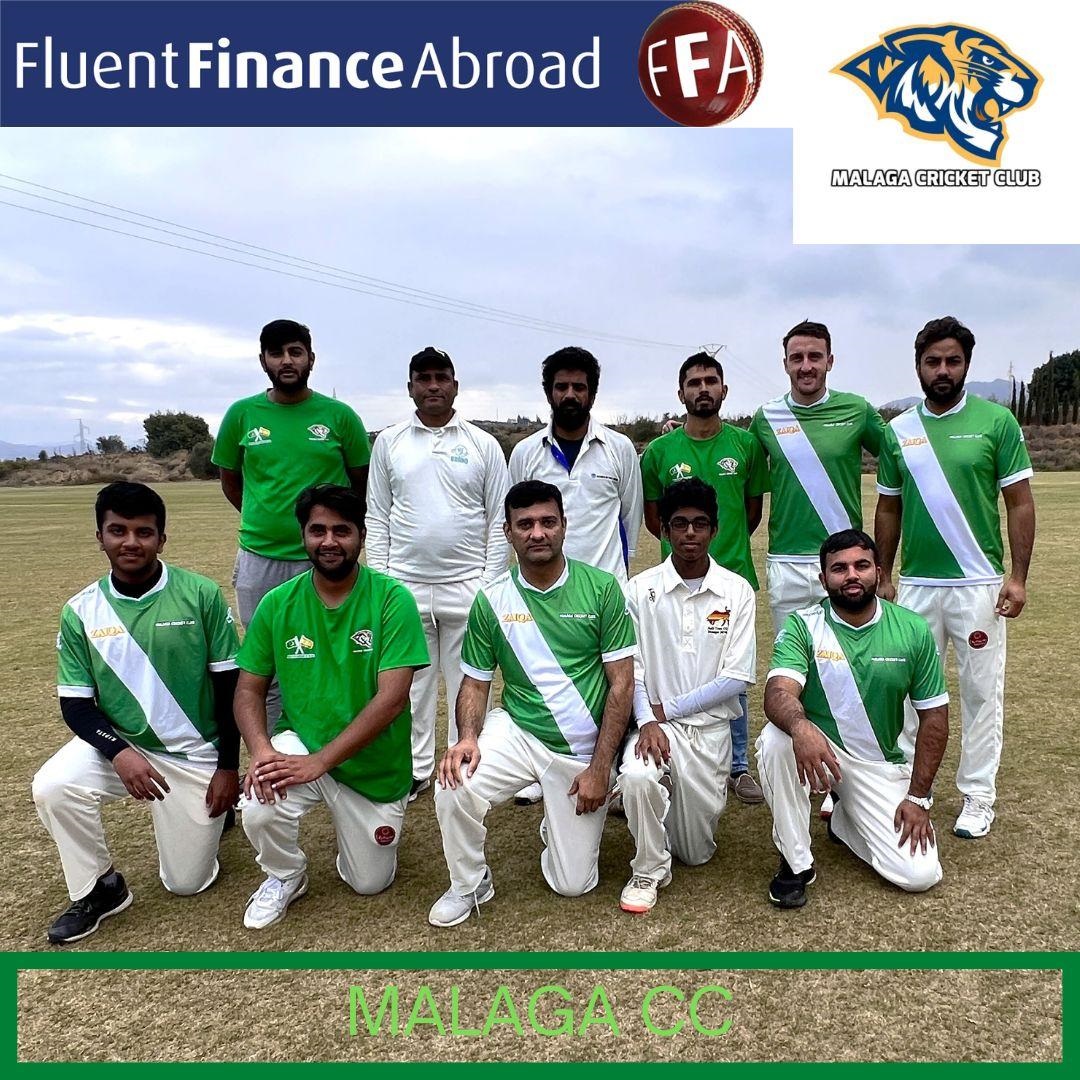 Avinash then decided to take control of the strike with Costa del Sol needing 2 wickets to take the points. Avinash continued to reduce the deficit with every ball he faced with some nice hitting off the bowling of Kenroy, who went for a sum of 50 runs off his 5 overs.

The chase was on, but Malaga lost another wicket by way of a run-out after an excellent throw from Bruce from deep mid-off.

Costa then applied pressure in the field in an attempt to keep Avinash off-strike and stifle the runs. This tactic finally paid off as Phil Hall added a slip in to bowl to the Malaga number 11, Husnain Zai which proved decisive as Lee Rimmer took the vital catch to end the Malaga innings and the win with Malaga CC ending on 155 and Avinash Pai stranded on 64 not out.

Player of the Match 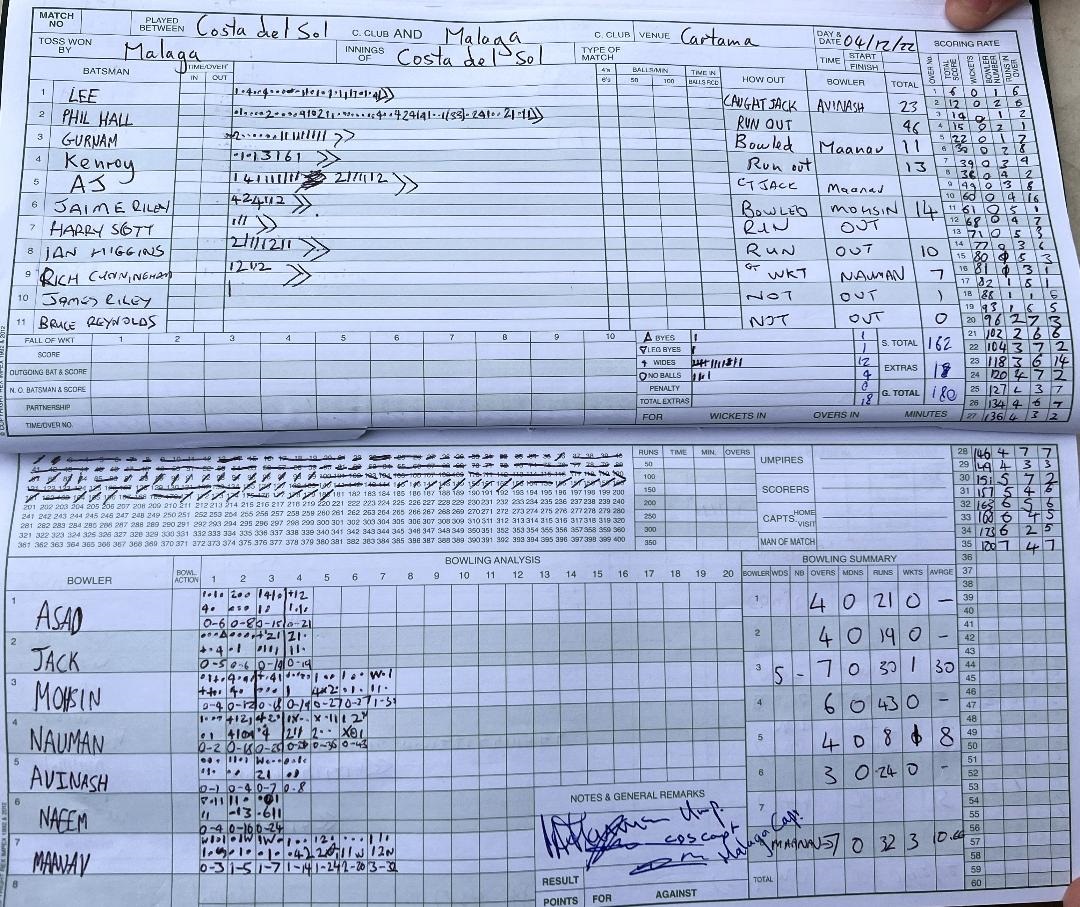 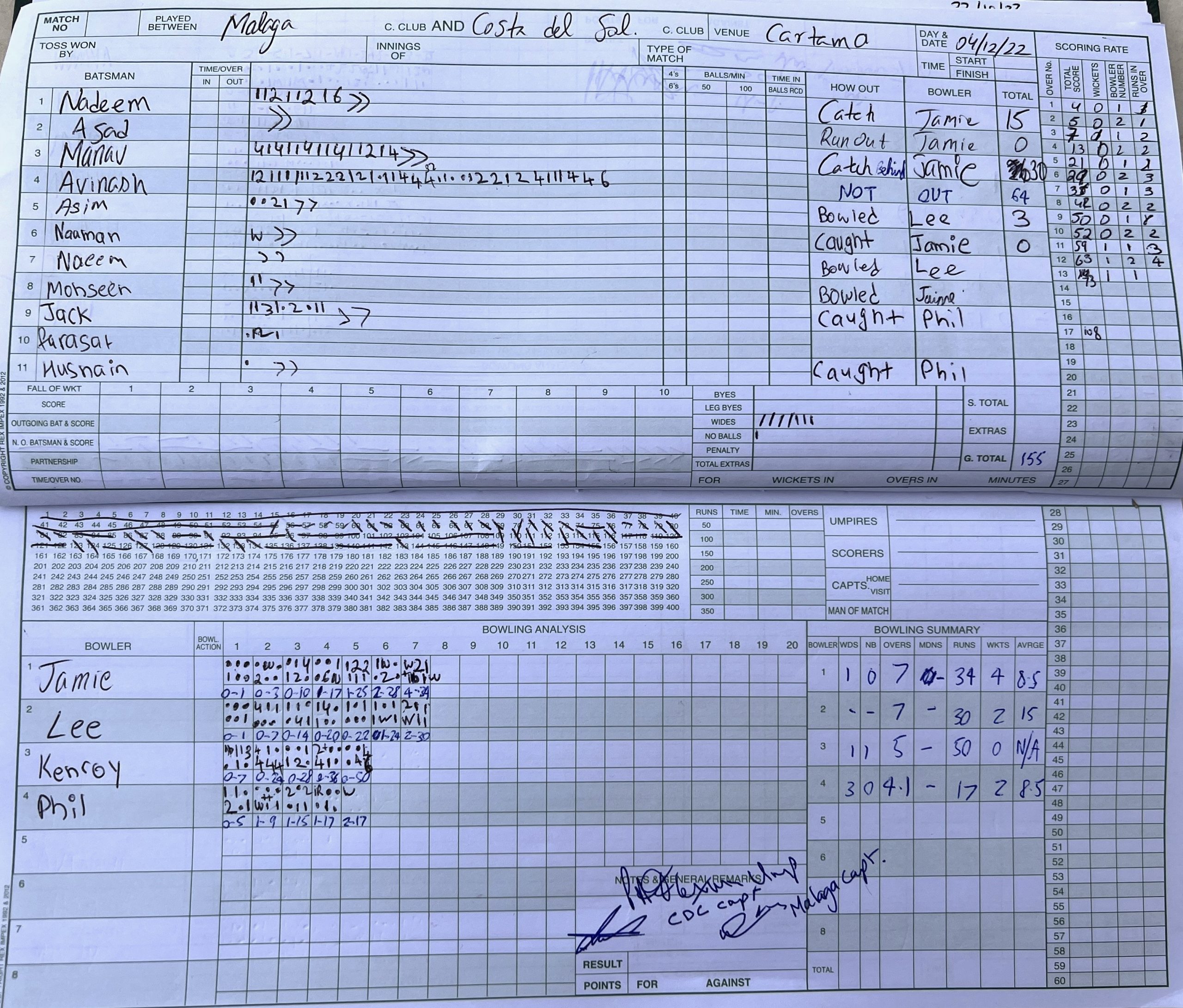 Many thanks to the umpires and match official Phil Flaxman and our Match Day Sponsor – Fluent Finance Abroad in San Pedro de Alcantara, Marbella. 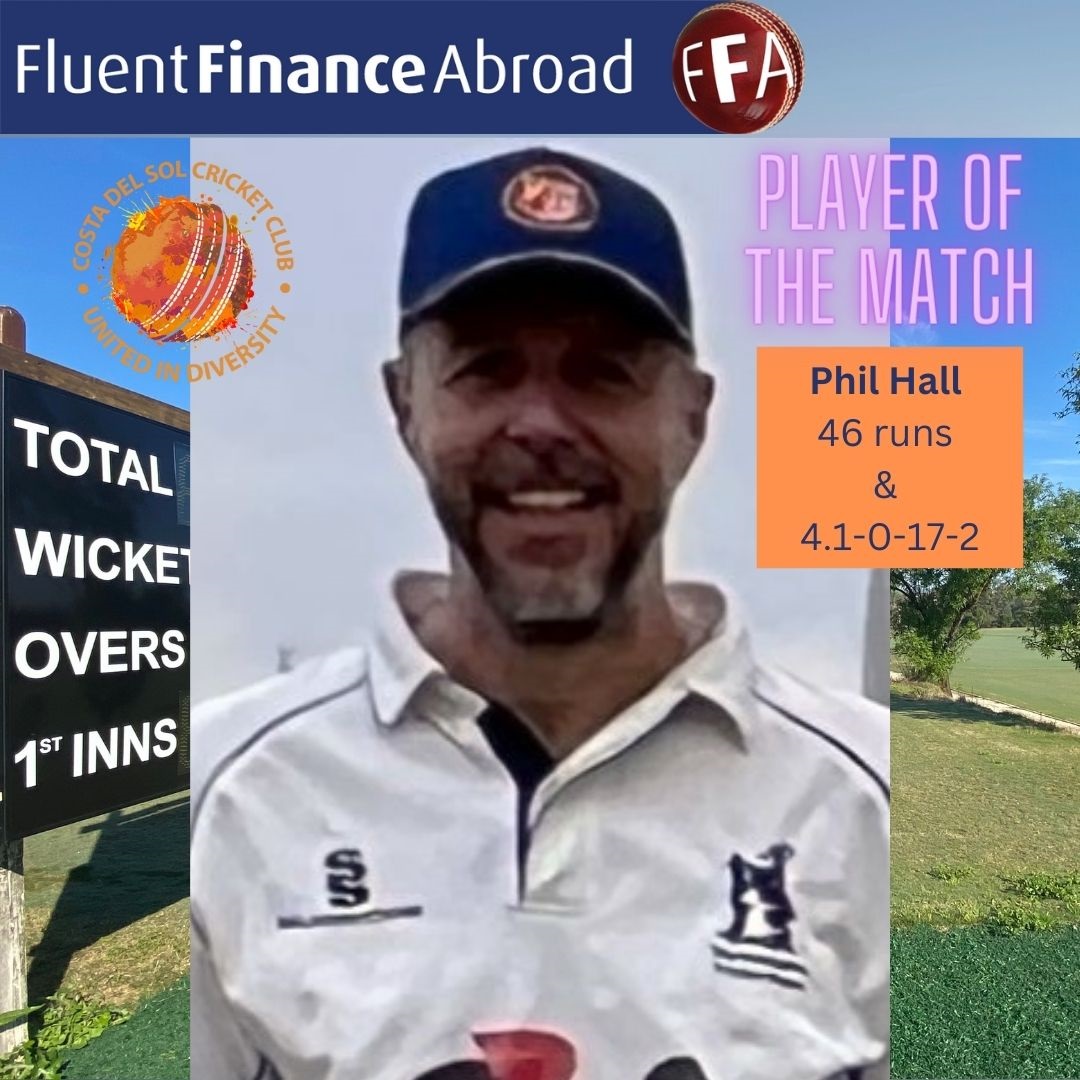