THE LAWS OF THE GAME WITH RON GRAHAM – MODULE SIX

Today we post the sixth installment on the Questions of the Laws of the game courtesy of Cricket España head umpire Ron Graham. 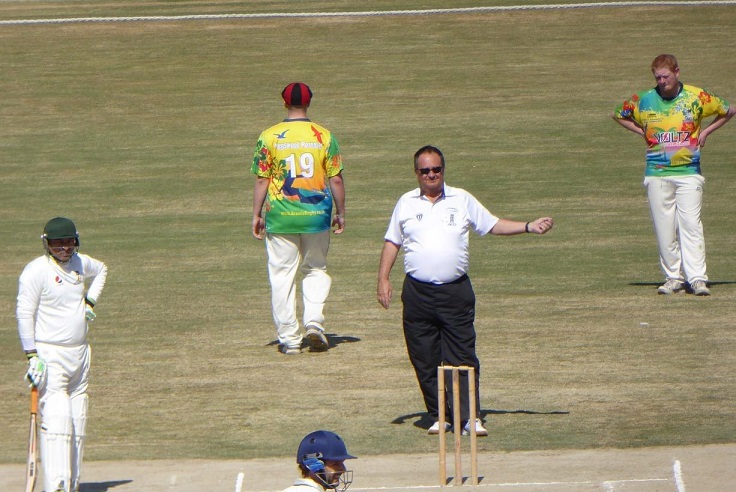 Q17.    The agreed tea interval is 30 minutes. When does the interval start, and when does it end?

Answer. Interval starts from call of ’Time’ before interval until call of ‘Play’ on resumption after the interval

Q18.    You have agreed to have drinks intervals during the match. Midway through the second innings the fielding captain informs you he doesn’t want drinks. What action should you take?

Answer . Inform your colleague. Speak to the batting captain or the batsman at the wicket who may deputise for the captain. If both captains agree you may forgo the drinks interval.

(a) Before the first ball of the match

(b) On the resumption of playafter any interval or interruption 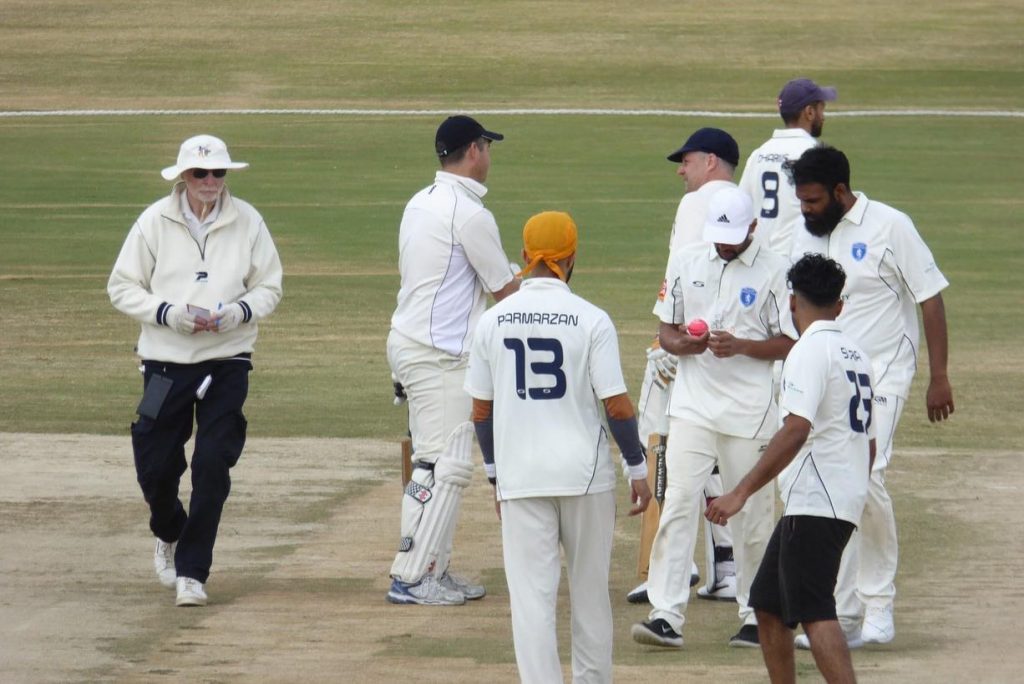 Then please read the laws below as five new questions will follow.

Answers to these questions will appear in Part Seven of the series.

13.1.1   A match shall be one or two innings for each side according to agreement reached before the match.

13.1.2   It may be agreed to limit any innings to a number of overs or to a period of time. If such an agreement is made then

13.1.2.1   in a one-innings match a similar agreement shall apply to both innings.

13.1.2.2   in a two-innings match similar agreements shall apply to the first innings of each side

In a two-innings match each side shall take their innings alternately except in the cases provided for in Law 14 (The follow-on) or in Law 15.2 (Forfeiture of an innings).

A side’s innings is to be considered as completed if any of the following applies:

13.3.2    at the fall of a wicket or the retirement of a batsman, further balls remain to be bowled but no further batsman is available to come in.

The captains shall toss a coin for the choice of innings, on the field of play and in the presence of one or both of the umpires, not earlier than 30 minutes, nor later than 15 minutes before the scheduled or any rescheduled time for the start of play. Note, however, the provisions of Law 1.3 (Captain).

As soon as the toss is completed, the captain of the side winning the toss shall decide whether to bat or to field and shall notify the opposing captain and the umpires of this decision. Once notified, the decision cannot be changed. 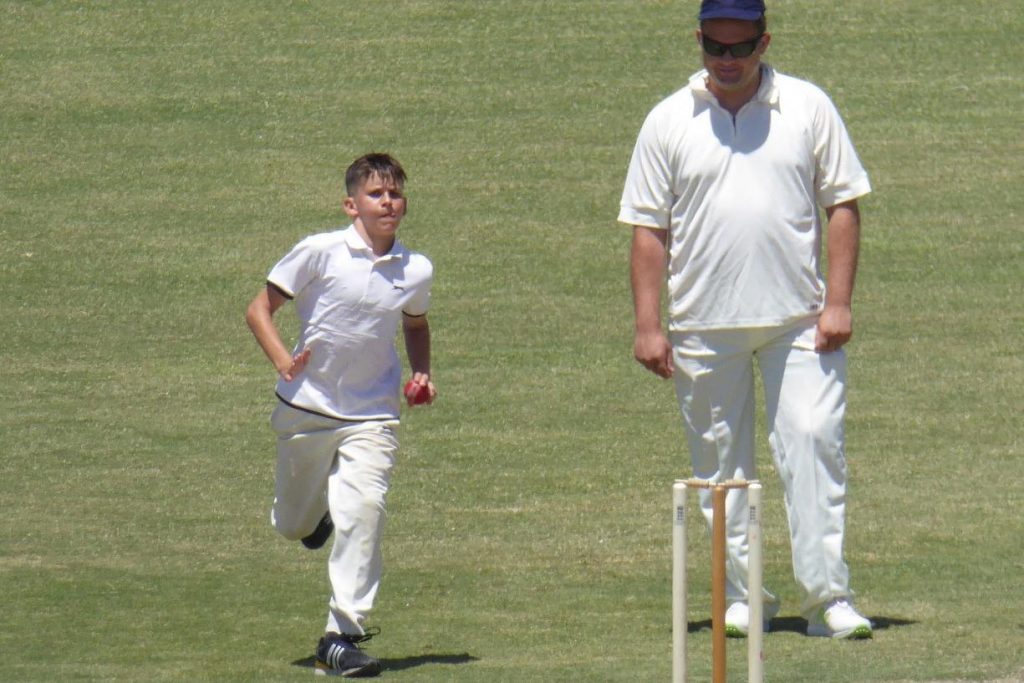 14.1.1   In a two-innings match of 5 days or more, the side which bats first and leads by at least 200 runs shall have the option of requiring the other side to follow their innings.

14.1.2    The same option shall be available in two-innings matches of shorter duration with the minimum leads as follows:

A captain shall notify the opposing captain and the umpires of his/her intention to take up this option. Once notified, the decision cannot be changed.

If no play takes place on the first day of a match of more than one day’s duration, 14.1 shall apply in accordance with the number of days remaining from the start of play. The day on which play first commences shall count as a whole day for this purpose, irrespective of the time at which play starts.

Play will have taken place as soon as, after the call of Play, the first over has started. See Law 17.2 (Start of an over). 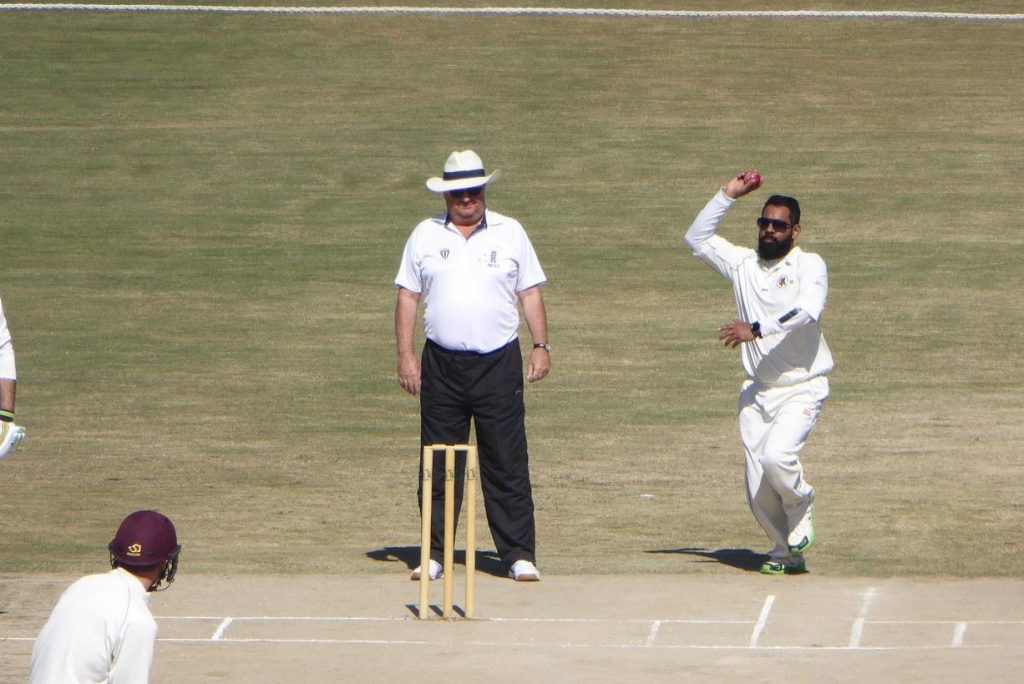 The captain of the side batting may declare an innings closed, when the ball is dead, at any time during the innings. A declared innings shall be considered to be a completed innings.

A captain may forfeit either of his/her side’s innings at any time before the commencement of that innings. A forfeited innings shall be considered to be a completed innings.

A captain shall notify the opposing captain and the umpires of any decision to declare or to forfeit an innings. Once notified, the decision cannot be changed. 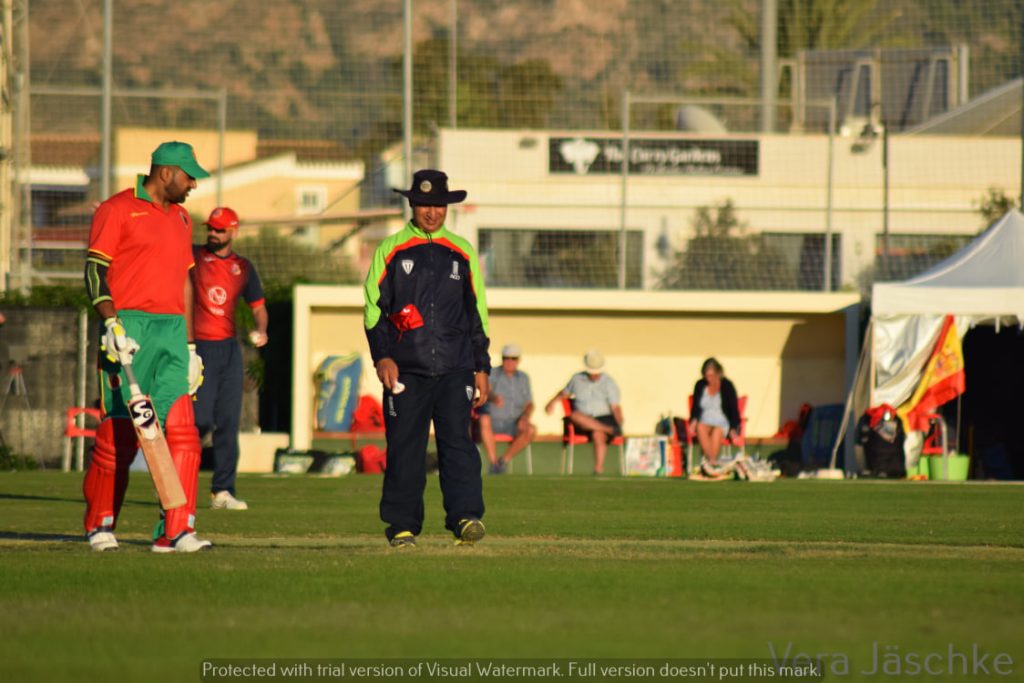 The side which has scored a total of runs in excess of that scored in the two completed innings of the opposing side shall win the match. See Law 13.3 (Completed innings). Note also 16.6.

Regardless of any agreement under Law 13.1.2 (Number of innings),

16.3.2   if an umpire considers that an action by any player or players might constitute a refusal by either side to play then the umpires together shall ascertain the cause of the action. If they then decide together that this action does constitute a refusal to play by one side, they shall so inform the captain of that side. If the captain persists in the action the umpires shall award the match in accordance with 16.3.1. See also Law 42.6.1 (Captain refusing to remove a player from the field).

–   Playing time shall be counted as lost from the call of Time to the call of Play, excluding intervals (Law 11) and suspensions of play (Law 2.8).

–  the time for close of play on that day shall be extended by this length of time.

–   if applicable, no overs shall be deducted during the last hour of the match solely on account of this time.

For any match in which there is an agreement under Law 13.1.2 (Number of innings), if the result is not determined in any of the ways stated in 16.1, 16.2 or 16.3, then the result shall be as laid down in that agreement.

The result of a match shall be a Tie when all innings have been completed and the scores are equal.

16.6.2    The side batting last will have scored enough runs to win only if its total of runs is sufficient without including any runs completed by the batsmen before the completion of a catch, or the obstruction of a catch, from which the striker could be dismissed.

16.6.3   If a boundary is scored before the batsmen have completed sufficient runs to win the match, the whole of the boundary allowance shall be credited to the side’s total and, in the case of a hit by the bat, to the striker’s score.

If the side batting last wins the match without losing all its wickets, the result shall be stated as a win by the number of wickets still then to fall.

If, without having scored a total of runs in excess of the total scored by the opposing side, the innings of the side batting last has been completed, but as the result of an award of 5 Penalty runs its total of runs is then sufficient to win, the result shall be stated as a win to that side by Penalty runs.

If the side fielding last wins the match, the result shall be stated as a win by runs.

If the match is decided by one side conceding defeat or refusing to play, the result shall be stated as Match Conceded or Match Awarded, as the case may be.

Any decision as to the correctness of the scores shall be the responsibility of the umpires. See Law 2.15 (Correctness of scores).

If, after the players and umpires have left the field in the belief that the match has been concluded, the umpires discover that a mistake in scoring has occurred which affects the result then, subject to 16.10, they shall adopt the following procedure.

16.9.1    If, when the players leave the field, the side batting last has not completed its innings and either the number of overs to be bowled in the last hour, or in that innings, has not been completed or the agreed time for close of play, or for the end of the innings, has not been reached then, unless one side concedes defeat, the umpires shall order play to resume.

Unless a result is reached sooner, play will then continue, if conditions permit, until the prescribed number of overs has been completed and either time for close of play has been reached or the allotted time for the innings has expired, as appropriate. The number of overs and time remaining shall be taken as they were at the call of Time for the supposed conclusion of the match. No account shall be taken of the  time between that moment and the resumption of play.

16.9.2   If, at this call of Time, the overs have been completed and no Playing time remains, or if the side batting last has completed its innings, the umpires shall immediately inform both captains of the necessary corrections to the scores and to the result. 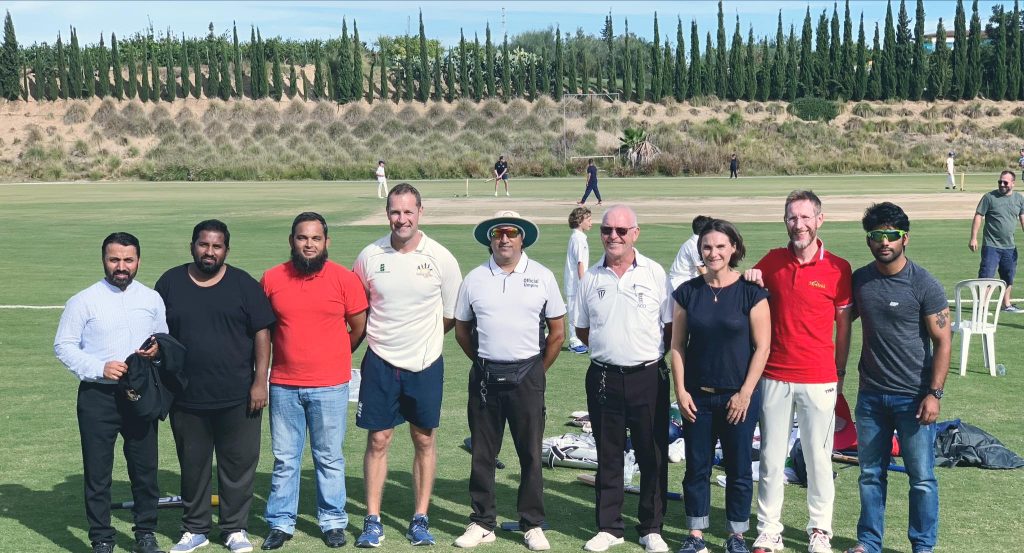 Q21.    State the 5 occasions when an innings is considered to have been completed?

Q24.    A captain who has won the toss informs you that he must speak to his players before he informs you whether he will bat or bowl. What actions should you take?

Q25.    The batting side require one run to win. The striker hits the ball along the ground towards the boundary. The batsmen have completed one run and are in the process of completing a second run when the ball crosses the boundary. What are your actions and how many runs are accredited to the striker? 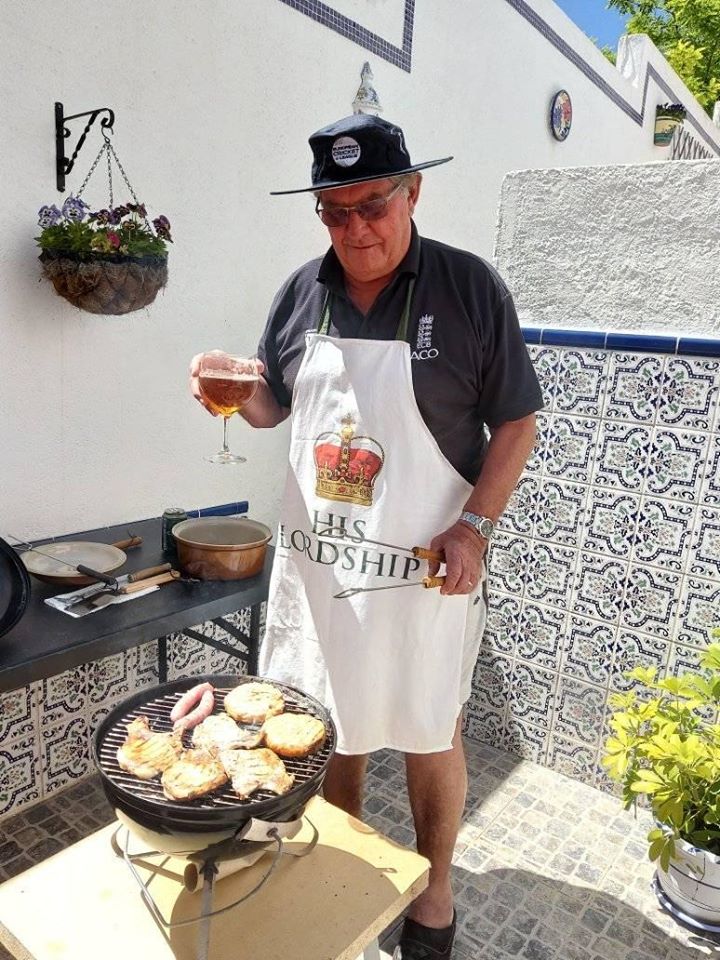