INTELLECTUALS WIN BY A WHISKER

Batting first the Intellectuals CC acquired a total off 196 for 7 off their 35 overs. Usman was top scorer for the home side and he was well supported by Nadeem, who struck 44 runs.

For the visitors young Theo Rumistrzewsc completed a tidy spell of eight overs, that yielded only 35 runs and bagged him one of the Intellectual wickets to fall.

In reply LMTCC were all out for 189 in the 32nd over, falling just seven runs shy. Culshaw hit 64 for his club, and Kinsella added another 26. However, Usman performed just as well with the ball as he did with the bat for the home side and claimed four LMTCC wickets for the cost of just 37 runs.

Unsurprisingly Usman was named man of the match for his match-winning performance with bat and ball and showing great team spirit. 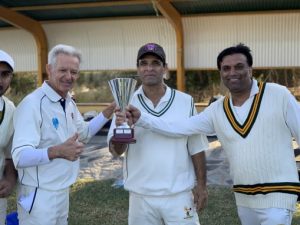